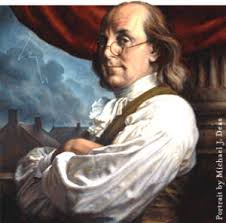 1. Benjamin Franklin was born in Boston, Massachusetts on January 17, 1706.

2. He spent most of his life in Pennsylvania.

3. His father wanted him to become a clergy but could not afford the years of schooling.

4. He wanted to write for a newspaper but new his brother would not let him. He wrote controversial, feminist letters anonymously under the name Silence Dogwood in his brother's newspaper, The New England Courant.

5. At age 21, Ben Franklin organized the colonies' first circulation library. Along with books, this library housed stuffed snakes and fossils.

6. At age 22, he became the owner of the Pennsylvania Gazette Newspaper. His printing company printed the paper money for both Pennsylvania and Delaware

7. Ben Franklin taught himself to read French, Spanish, and Latin.

8. Ben Franklin is known to have played the guitar, harp, and violin.

9. Ben Franklin is the first chess player known by name in the United States.