Over the last 100 years, obesity has become a big fat problem. A person is obese if he is extremely overweight. Obesity can lead to diabetes, high blood pressure, and heart attacks. It is the cause of death of 300,000 people per year in the United States. Obesity is most commonly related to the amount of physical activity or exercise a person gets and what a person eats.

Dining out at restaurants, especially fast food restaurants, is associated with increased weight gain and obesity. People who live in areas with low access to healthy foods often shop at “corner” stores instead of grocery stores for food. These stores do not usually supply fresh fruits and vegetables.

Regular exercise has been shown to reduce and prevent obesity and ailments like diabetes, high blood pressure, cancer, and heart disease. To study obesity trends, we have provided obesity data for DC and Shanghai, the largest city in China, below. 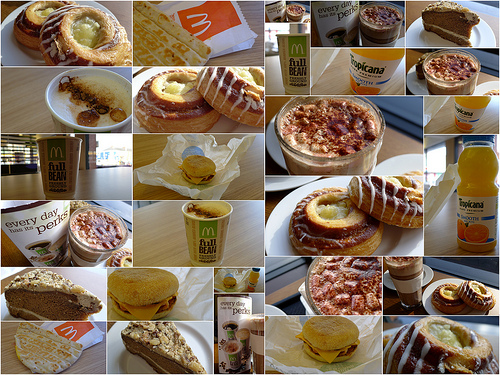 I was stunned when my daughter's "kids’ meal" was served. She ordered crispy chicken tenders with fries – typical restaurant fare for kids her age – and I thought they surely made a mistake and gave her the full-sized version. There must have been an entire chicken on her plate!

The manager came over to see how we liked the meal and I commented on its size. His response was: "Well, we don't want our customers to leave the restaurant hungry or dissatisfied." I'll say. Looking around and seeing the relative size of the patrons in the restaurant solidified the oft-mentioned statement that Americans are simply fat.

At first, I thought it was our being away from the US for so long that made me take notice of the growing size of Americans. My sister, however, said that wasn't the case. Living right in the thick of it, she notices it too – the sizes of restaurant portions as well as the increasing size of the people consuming them.

Even the drinks are huge! I have to order “smalls” for myself and my girls every time we're out.  They usually grumble until they see what they are getting, which is more than they can actually drink. We can never finish a meal when we eat out; but for the prices I wind up paying, I can't help but cringe at seeing it go to waste.

I thought – and still think – that I've personally gained some weight in the last year or so while living in China. Age? Too much snacking? Too little exercise? Could be a multitude of excuses reasons, but I must say I felt better when I arrived in the States. I do not have a weight problem compared to what I have seen in various parts of America thus far. While I have thoroughly enjoyed indulging in southern fried cooking and other home country delicacies, I know it's all temporary for me. I might well be in serious trouble if I had these dishes available to me on a regular basis.

Instead, I have a greater appreciation for the non-processed, freshly-prepared Chinese dishes that we have more often than not when living in Beijing. The whole food philosophy is really quite spectacular, from the ingredients used to the amount the Chinese typically consume (my ayi can make an amazing dish or two using the smallest amount of chicken for our family of four). The idea of food being at the center of family and celebrations might be similar in some respects, although in China people tend to treat meal time as more of a family affair – a dwindling practice in America.

Obesity is an issue in many countries, as we all start to notice unhealthy trends and wish better for our children. I certainly found a new appreciation for nutrition that I might have otherwise overlooked during our summer visits. While we don't shy away from indulging while we're here, the wheels in my head spin for our return, when I'll make an oath to pay closer attention to my family's diet moving forward. I don't want the super sized phenomenon to become "normal" in our own lives.

Childhood obesity is on the rise in China

In what is undoubtedly a trend here in Beijing as well, childhood obesity in Shanghai is now higher than world averages, the Shanghai Daily reports, and is approaching the level of famously fat places like the United States and other western nations.

Shanghai Jiaotong University surveyed over 10,000 primary school students in the Shanghai area and found 13.3% were overweight, while 6.5% were classified as obese. What's even more shocking is the rate at which the obesity epidemic is rising ...24.4% over the last decade alone.

There's nothing new in the analysis of why: rising incomes and the increased availability of junk food has lead to an increased intake of calories and not enough exercise to burn it off.

Add to that the intense academic focus of Chinese schools (which typically means less physical education and lots of after-school homework) and the 'little emperor' syndromewhere 2 parents and up to 4 grandparents dote on a single descendant -- and it's no surprise little waistlines are growing.

But with the economy continuing to trend upwards and no letup on the academic pressure children face, what's the next decade going to look like for China's children?