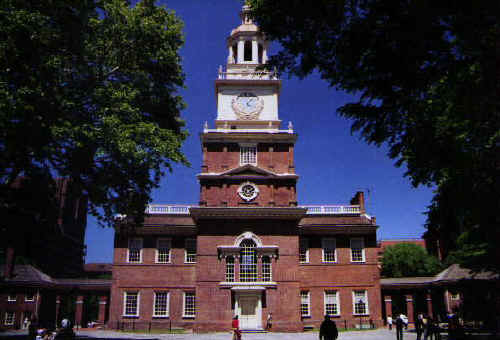 Located on Chestnut Street between 5th and 6th Streets. The building is open year round, though hours vary by season.Constructed between 1732 and 1756 as the State House of the Province of Pennsylvania, it is considered a fine example of Georgian architecture. From 1775 to 1783. this was the meeting place for the Second Continental Congress. It was in the Assembly Room of this building that George Washington was appointed commander in chief of the Continental Army in 1775 and the Declaration of Independence was adopted on July 4, 1776. In the same room the design of the American flag was agreed upon in 1777, the Articles of Confederation were adopted in 1781, and the U. S. Constitution was drafted in 1787. The building, inside and out, has been restored whenever possible to its original late-18th century appearance. Most of the furnishing are period pieces.