Definiton:Physical changes in the brain due to injury.Depression may result from injury to the areas of the brain that control

emotions. Changes in the levels of certain natural chemicals in the brain, called neurotransmitters, can cause depression. Emotional response to injury.

Link to the educational video:http://https://youtu.be/2rxeFgKIS9s

Symptoms of depression include:

A concussion is a mild traumatic brain injury, caused by a blow, bump or jolt to the head that disrupts the brain’s normal function. Not all blows or bumps cause a TBI, however. And a TBI, when it does occur, can be mild.

According to the Centers for Disease Control and Prevention, TBI, as concussions are known medically, was the diagnosis in more than 282,000 hospitalizations and 2.5 million emergency department visits in 2013 (for people of all ages). From 2001 to 2012, the CDC says, the rate of ED visits for injuries related to sports or recreation related concussion more than doubled among children ages 19 and younger, the agency says. 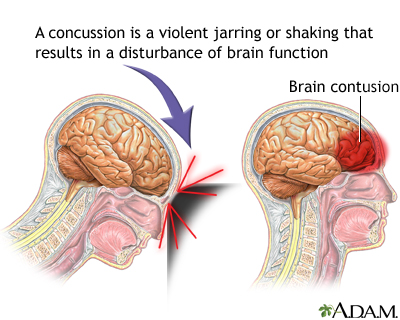