There are a lot of deadly animals in the world. Some are poisonous, meaning they use poison as a defense. If you touch them, you might absorb the poison through your skin. Others are venomous, meaning they use their poison to attack. What are some of the deadliest animals out there?

One truly deadly animal is the puffer fish, which does not look dangerous, but its skin and organs are poisonous to humans. Oddly, people like to eat the puffer fish. Cooks who work with it have to have a special license. It is supposed to be delicious—as long as you don’t take a bite of those parts of it that might be fatal Puffer fish could be the last meal you ever have. The stonefish is a poisonous fish covered with sharp spines where it stores its poison. If you step on it—watch out! It uses its spines to keep away predators.

The exotic poison dart frog is found in the jungles of South and Central America. These tiny frogs are unusually colorful, but their beauty is sinister. Their skin is so poisonous that if enemies touch it or try to eat it, they will quickly die.

Snakes, of course, are known for being venomous. The taipan, which lives in Australia, is considered the world’s most venomous snake. Its venom is said to be four hundred times stronger than that of the next most venomous snake. Luckily, the taipan is very shy and secretive, and it is rarely seen by humans. King cobras are the longest venomous snakes, growing to more than eighteen feet in length. They live in East and Southeast Asia and have been known to kill full-grown elephants. The faint-banded sea snake, found in the Indian Ocean, is another deadly snake, though it rarely bites. When it does bite, it does not always release its poison. 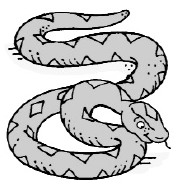 Some animals have very venomous stings. Scorpions, with their sharp tails, are among them. The death starker scorpion, found in North Africa and the Middle East, has a strong, painful poison. Many spiders are venomous, too, including the Brazilian wandering spider. It is especially dangerous because it moves around a lot and might be found in someone’s shoe or under a bed. In the United States, black widow spiders and brown recluse spiders are the most common venomous spiders, but they do not match the danger of the Brazilian wandering spider or the funnel-web spider of Australia. Like scorpions, venomous spiders use their poison to get food.

You might not think of an octopus as being venomous, but the blue-ringed octopus certainly is. It is small and brightly colored, and it can move very quickly. It lives in the waters around Asia and Australia, and its sting is both painful and dangerous. The waters off Japan, the Philippines, Australia, and Hawaii are home to the animal that is considered the world’s most venomous— the box jelly, a fearsome creature with long tentacles that are full of poison. Like the blue-ringed octopus, the box jelly uses its poison to stun and kill other animals, which it then eats.

There are poisonous and venomous animals almost everywhere in the world. That is why it is usually a good idea to be careful if you see an unfamiliar animal— especially an unfamiliar snake, spider, jellyfish, scorpion, fish, or octopus! 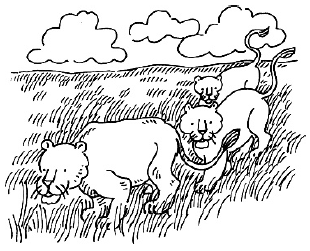 In human communities, people work together to obtain food and shelter, raise children, and enjoy a better quality of life. When each person contributes to a community, the community functions better. A society needs many different kinds of workers in order to do well. Animals also live in varied communities. In fact, nature gives most creatures a social instinct that serves a number of purposes.

Many lions work together in well-organized groups. The females do the hunting, working in teams to trap their prey. Because of this, the lions can surround an animal and cut off its escape. Wolves also hunt in teams, and they have a strong social order in which they follow a leader and obey rules for the good of the pack.

Naturalist Dr. Regis Ferriere notes that some insect species exist cooperatively, as well. An example is the relationship between ants and aphids, or tiny plant insects. The ants protect the aphids from predators, watching over groups of aphids on grasses as if they were herds of cattle. In return, from time to time, the ants “milk” the aphids of sugar droplets in their bodies.

Bees, ants, and wasps have special jobs in their communities. For example, a queen bee lives with worker bees and other bees in a beehive. The worker bees serve the queen so the queen can lay eggs. If the queen did not lay enough eggs, the busy hive would become vacant. In an ant community, soldier ants are protectors for the colony, and in bee and wasp communities, females take on the job of providing defense.

Baboons and antelopes often eat together to protect one another. Baboons have excellent eyesight and antelopes have a keen sense of smell, so together they function as a warning system. Cattle and birds work in much the same way. The birds eat the insects that the cattle stir up when they move, and in turn, the birds make a lot of warning noises and fly off when they sense danger. Thus, their combined efforts benefit both the birds and the cattle.

Crocodiles and birds called plovers help each other in a unique way. Crocodiles have very sharp teeth. They often have tiny, harmful animals attached to their teeth that the plover will pick out, getting food for itself while helping to clean the crocodile’s teeth.

On the African plains, the honeyguide bird looks for honey, but when it finds a beehive, it cannot open it. The ratel, or honey badger, comes to the rescue, tearing open the beehive that the honeyguide has found for it and exposing the honey so that both can eat.

Another example of two very different animals helping each other can be found in warm oceans. The remora is a fish that cannot swim well, but the form of its head allows it to attach itself to large sharks. It gets from one place to another in the ocean by getting rides from sharks. In turn, the remora eats small animals that attach themselves to the shark and can hurt it.

As you can see, there are certain basic similarities between human and animal societies. We have many of the same needs, after all. We must depend on one another to help all survive.