What are atoms?
What do they look like?
What are they made of?
What properties do they have?
What are elements?

The next unit investigates the building blocks of matter and corresponds to pages 119-157 in the text. Obviously there can be tremendous depth at the atomic level. We will strive to understand the basic building blocks of atoms (protons, neutrons, and electrons) and how they affect the atom's properties like reactivity, radioactivity, conductivity, etc.

Humans love to know what makes up things around us.  We take things apart.  Long ago, people asked themselves what makes up matter.  They broke things down smaller and smaller into more and more simple things.

In ancient greece (400 BC) Democritus gave the tiny, unseen substances the name atom. Over the years atom has been defined as the building blocks of all matter. Only in 2005 has anyone even claimed to have seen one, yet we know all sorts of stuff about them. We learned about atoms the way you learned what was in you “black box” and may very well be wrong.

How could you see the shape of something too small to see?

They knew that you could see an enlarged sillouette of the shape of something by looking at its shadow, so they pounded gold foil very, very thin and shined charged particles through it to see the shadow of the gold atom.

What did the shadow tell them?  That most of an atom is empty space.  But there is a center that is positively charges and a large field of negative space around this center.  They drew up this picture of what they think an atom looks like: 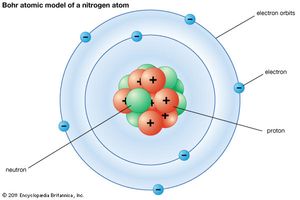 Note the the majority of everything is in the center.  That area is called the nucleus of the atom.  But the atom takes up a lot more space due to a shell or cloud of something negative around it.

Ernest Rutherford (1911--England) probed the atoms’ structure and guessed that atoms are made of Protons, Electrons and Neutrons (each of these are made of even smaller, sub-atomic particles like muons, quarks, mesons, and neutrinos).

Protons have significant mass and a positive charge.

Electrons have an insignificant mass and a negative charge.

Neutrons have mass and no charge.

The protons and neutrons are found in the nucleus (note that almost all the mass is there).

Meanwhile electrons zip around the nucleus in wild orbits like satellites around a planet.

The electrons stay around the nucleus for the most part due to electrical attractions to the protons. But protons want to repel from one another. The neutrons are there to keep the peace.

Not all atoms are the same.  Sometimes an electron or neutron might be missing or extra.  When that happens, the atom behaves differently.

Ion - a charged atom due to extra or missing electrons.

Isotope - a differently weighted atom due to extra or missing neutrons. Atoms may have extra electrrons and be negative ions or have fewer electrons and be positive ions.  You will understand more about why ions exist later when we learn about elements. 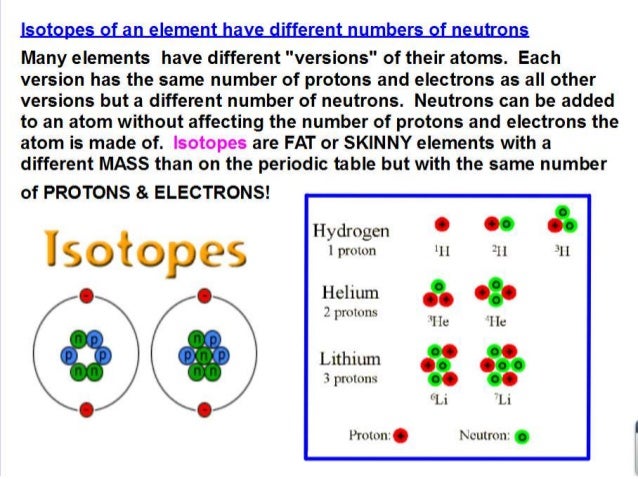 Since these ones do not have the right number of peace-keeping neutrons, they tend to break down through nuclear decay (we will learn about later this year).

How many different building blocks (atoms) are there?

During the middle ages alchemists tried to answer this by breaking things apart into the most simplified substances they could and started keeping careful lists. They got 20 or so and kept the name element. Today we have discovered (or created) 120 or so and define an element as any substance that cannot be separated into different substances by chemical means. They have been organized by properties into the periodic table of elements.

Atoms come in different "flavors" or types based on how many protons they have.  The number of protons determines the atom.

Here is oxygen.  It has 8 protons and therefore 8 electrons.

Most oxygen also has 8 neutrons.  The protons and neutrons both have weight, so this atom weighs 16 (8 protons + 8 neutrons).

There are lots of different flavors of atoms.  They are called elements.  Here are the known ones: 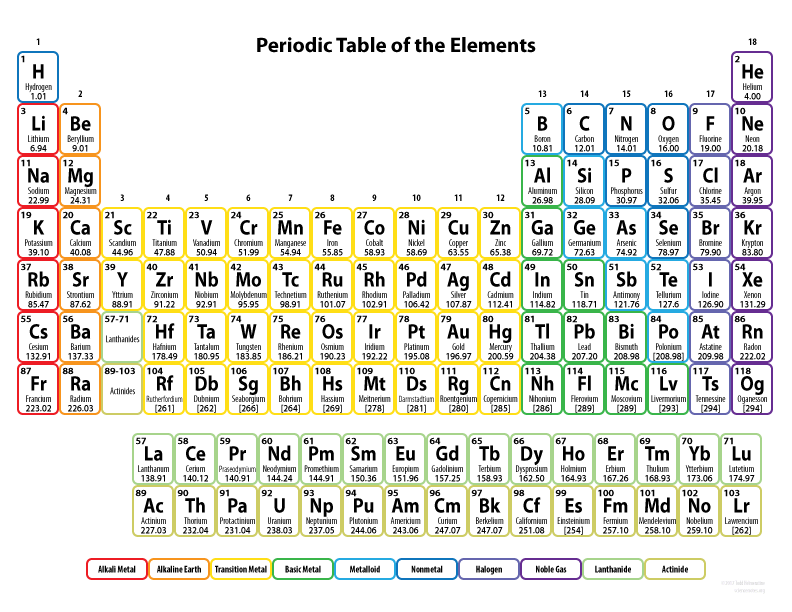 They are organized this way for a reason.  Everything in the same column shares certain traits.  Looking into why this is, we find that the electrons orbit the nucleus in "shells" or "orbitals"

The first shell can hold only two electrons, so there are only two elements in that row (hydrogen and helium).

The next two rows can hold 8 electrons each, so there are 8 elements in those rows.

Elements within a column share characteristics due to the number of electrons in their outer shell.

For example, all the elements in the column furthest right have completely filled outer shells, so they are not chemically reactive.

All the elements in the column furthest to the left have only one electron in their outer shell, so they are desparate to shed it.

All the elements in the halogen cloumn need only one more electron to fill their outer shell, so they tear it off other atoms.

The table is set up to tell you the important information about the element: 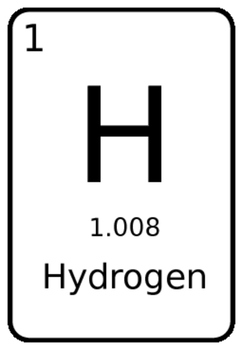 Can you figure out how many electrons and neutrons it has?

It would have one electron to balance out the one positive proton and it would not have any neutrons because the weight is the number of protons plus neutrons.  Also, there is no need for a neutral neutron keeping the nuclear peace when there is only one proton.

Draw and label an atom of based on the info on the table of elements.

Which elements are more reactive?

Which ones are really stable?

Which are the lightest?

What is an ion?

What is an isotope?

Construct a 3D model of an atom out of original material (be creative).

Research any of the scientists who contributed to our atomic understanding.

What is a quark? A muon? A nutrino? Find out and teach the rest of us about these sub-atomic particles.

Reorganize the periodic table of elements by your own system and tell me why yours is better.

Memorize the elements song or make your own up.