How do we know it is happening?

What are the different types of tectonic boundaries?

What are the effects of it?

Plate tectonics is the theory that plates of Earth's crust are sliding across the surface of Earth.  This theory includes the effects of such movement.

But how do we know?  What evidence is there that there are sliding plates? 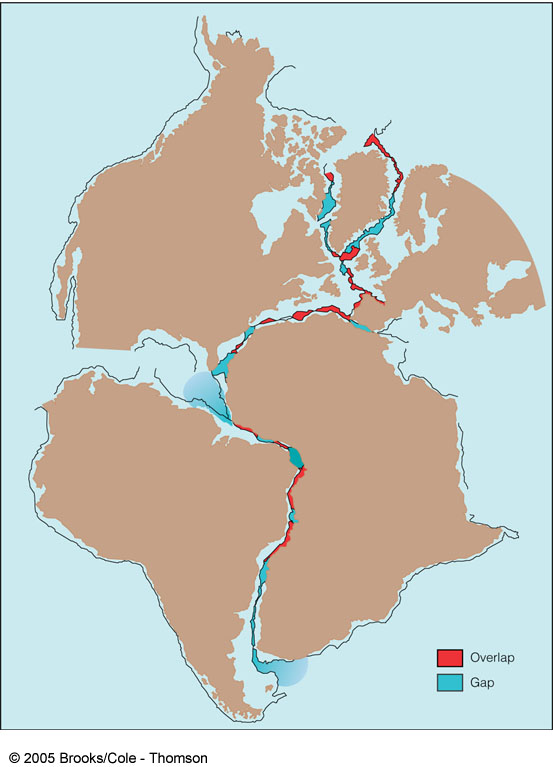 That man popping up is Alfred Wegener

He looked at this puzzle fit and declared that the continents drift on top of the oceans: 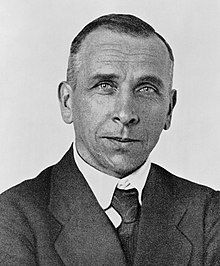 And he was vilified for it.

But, he predicted that fossile evidence would prove he was right, and it did!

Fossil and rock evidence indicates that they were once together...

This further solidified his theory of continental drift.

But people really did not like the thought of rocks floating on water (continents floating on the oceans) and did not buy in.

His theory sat largely un-believed for many years.  Further evidence came to light during WWII.  As we shipped stuff to Europe, we didn't want German U-boats getting under us, so we used strong magnetic detectors as we went back and forth across the Atlantic and discovered something interesting:

We had known that molten rocks, when they solidify, will orient all their iron pointing toward the North Pole.  The sea floor rocks that have magnetic minerals all face north (makes sense), but then we find a section where all of the rocks face south (!???!).  Then another northern section, then southern, and so on.  It made a pattern on the sea floor.  Closer inspection showed the pattern was reflected from the center of the ocean:

In this, black is facing North, white is facing South.  This data spans the Atlantic Ocean.

What do you see in this?

What more information would you want?

This made scientists want to investigate those stripes closer.  They dated them and: 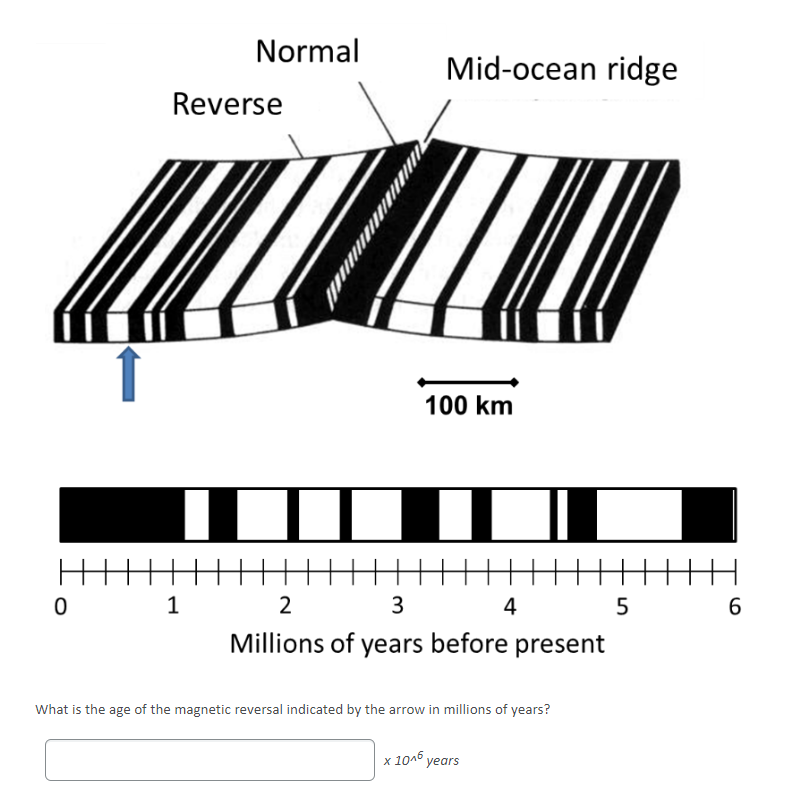 It means that if you go back in time, the ocean was smaller and we were closer to Africa and Europe.

It also seems to mean that the magnetic north pole and south pole have swapped places over the years.

So, does this mean that the Earth is growing?

Some scientists traveled to other places to search for similar spreading.  Some used lasers to measure the rate of growth by seeing how quickly New York and Paris are moving apart from each other.  Much data was recieved.  Here is what they found:

There were some parts of the world that were moving apart as measured by the dated sea floor and lasers.

Some were moving closer together as measured by lasers.  But where was the land going? 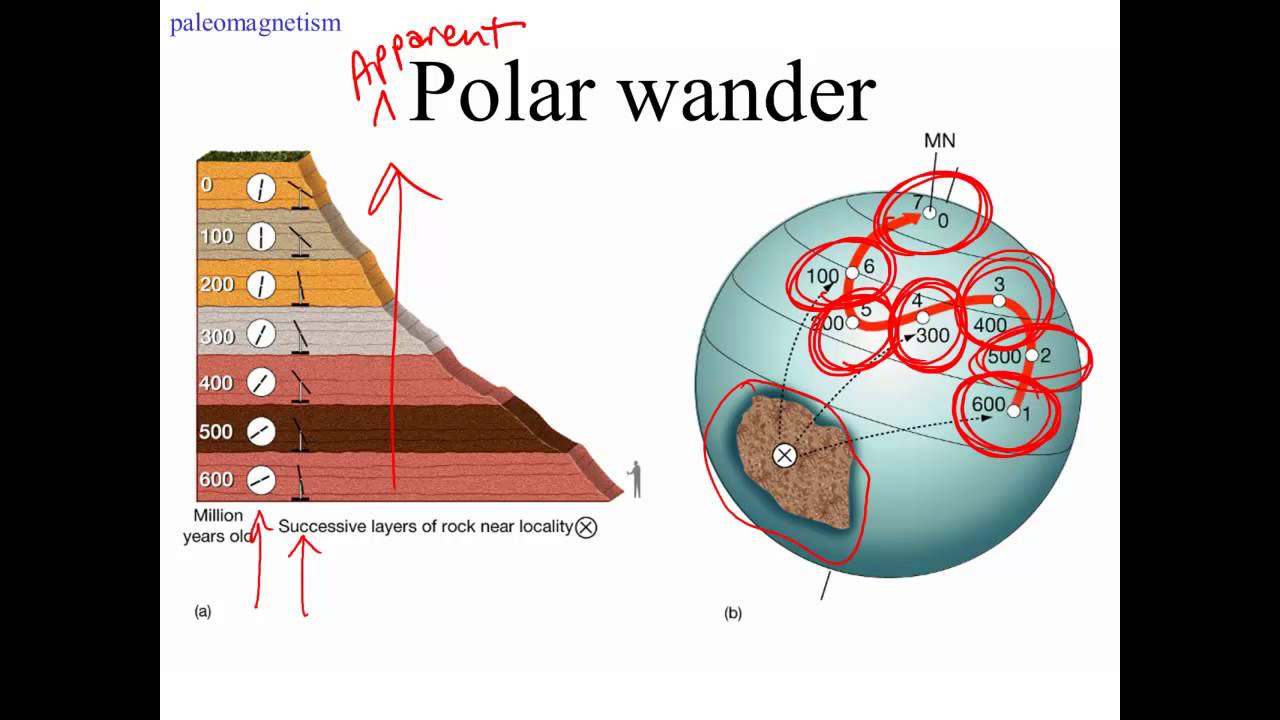 To make them line up, the continents must have moved and if you line them up, they recreate pangea!  This is called "apparent polar wander path".

But where is the land going again?

In the 1950s, a geologist studying earthquakes discovered the last piece of the puzzle...where the land disappears to.

He was researching the power and depth of earthquakes in the South Pacific and found this: 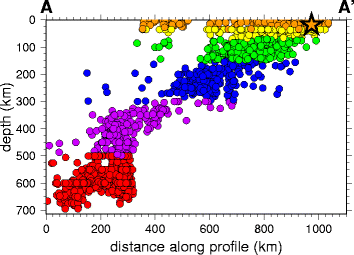 From where he was (the star), the earthquakes made a slope descending down into the Earth.  This turned out to be the plate sliding under the other plate:

In other words, he discovered where the plates went.

As you can see, the land is sinking back into the Earth at these places and the force of that causes earthquakes and volcanoes.  The earthquakes get weaker as the land slides past more magmafied rock further underground until some point where all earthquakes seem to stop.  He concluded that this is the point where the rocks are too magmafied to resist the other rocks sliding (everything melts).

In some places, land collides with land and you get mountains:

We call them plates and they can be traced out by looking at the pattern of earthquakes and volcanoes:

The pattern of earthquakes and volcanoes seem to mark out chunks of Earth...

The evidence shows that all the plates except the African plate are moving.  The fastest, largest, and oldest plate is the Pacific plate which is moving at about 9 cm / year (that is the rate at which your fingernails grow!).

So, plates are moving!

There are three ways they can move:

So, the three types of plate bounradies:

Looking closer at the boundaries:

When magma from the core wells up and splits the crust, you get two plates moving away from each other: 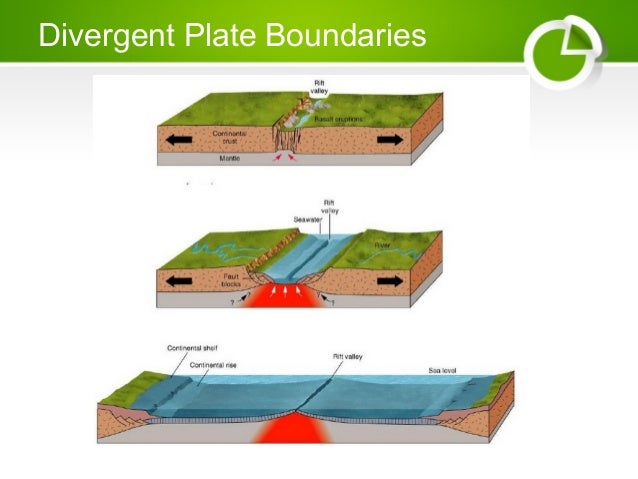 These will have hot magma from the core (mafic and friendly) as well as weak, shallow earthquakes

Where two plates come together, they will either crash into each other or one will sink under the other: 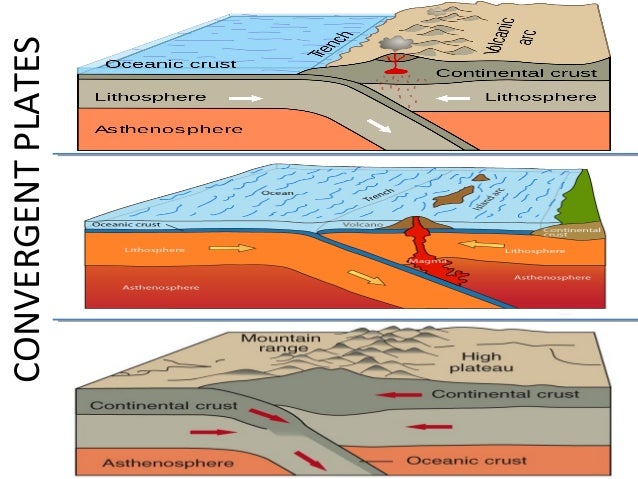 These make powerful earthquakes and either tall mountains or dangerous (felsic) volcanoes.

When plates slide past each other, we get the last of the boundaries:

These cause powerful earthquakes!  But no volcanoes usually.

These are the agreed upon plates:

Our next unit will be the effects of plate tectonics:  Earthquakes, volcanoes, and mountains!