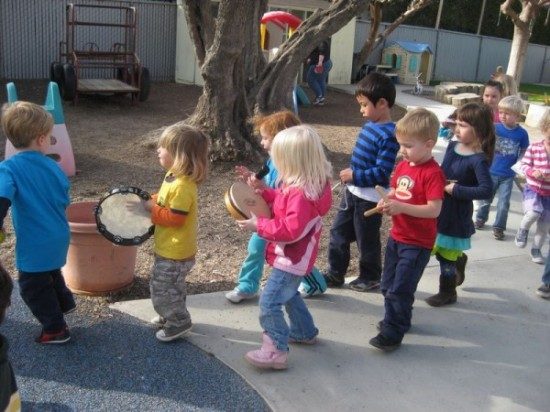 What is the preschool stage of development all about? You will find that the pretend play of three- to six-year-olds is charged with power themes as superheroes and monsters emerge. Feeling powerful is important to preschool children, and they can experience it in their imagination even if they often feel small and helpless in real life. Their pretend play is their way of trying on new roles and sorting out what's real from what's imaginary. Preschoolers can seem to be quite clear about what is real and what is fantasy one minute, while the next minute they can become terrified of a witch puppet or of a ghost on TV.

Words help preschoolers to feel important. The three-yearold asks, "Why?" The four-year-old says, "It's dumb and I hate it!" The five-year-old says, "How does it work?" They are learning that words have power; sassing, whining, arguing, bad language, and baby talk all surface during this period.

Friends are very important to preschoolers, and they will play with imaginary friends if they can't play with real ones. Although social experiences are important, don't expect their social interactions to run smoothly. Preschoolers' play with others is usually quite bumpy, and during a morning of play you will probably observe tenderness, caring, imagination, laughter, shouts, screams, foul language, cooperation, arguing, and hitting and kicking, as children go about the business of getting to know each other. So keep social gatherings such as birthday parties simple and short. One hour long and one guest for each year of age are good rules if you want everyone to have a good time.

There is a new awareness of the sexes during the preschool period. Hospital play is a favorite game; it is children's way of understanding their bodies. While parents will want to set limits on this play, they need not be upset about it. Around five, many boys refuse to use women's rest rooms, causing some inconvenience for their mothers. Boys have decided that there are two kinds of people in the world-male and female-and that they are male. Signs or taunts of "No boys allowed" come from groups of girls, and boys often take a "boys-only" attitude. Little boys may talk of marrying their mothers or sisters or girls they know. Girls do the same with fathers, brothers, and boys.

Two types of children may cause parents concern: the aggressive and the overly cautious. Aggressive children need large amounts of tolerance and open space. Contrary to the opinion of some, aggressive children are not necessarily hit by their parents or encouraged to hit others any more than nonaggressive children are. Still, you do not take this type of child to a china shop. These are children who grasp life rather impulsively, without a lot of forethought about the consequences. Constant setting of limits may not be effective with this type of child at this age. It is better to decide on a few important rules, such as not hurting others and not damaging property, and then to ignore temporarily some things like making noise or clutter. These children respond in the long run to a lot of gentle guidance.

Overly cautious children, on the other hand, are watchers. They don't like to make mistakes. They need adults around who say with words and actions, "You don't have to hurry. Do this when you are ready." Pressuring them to perform before they are fully able does not work.

Young children go through four stages as they learn to defend their territory. The first stage is simply hitting or grabbing to get what they need. The second stage is the use of verbal aggression-words as power. Then bribery becomes an important tool: "If you give it to me, you can come to my birthday party." Older preschoolers learn to collect allies. They learn how to gang up on each other. These acts are not good or bad in themselves; they are just steps to higher levels of socialization. When you need to, set some rules about these actions, but remember your child is handling situations the best she can with limited experience. Handling things awkwardly is better for a child than not handling them at all.

Children ages three, four, and five break rules regularly and can be quite difficult to live with at times, but their rule breaking is only the first step toward rule keeping and rule making, which will become important developmental tasks when they are ages six to twelve.

Because of frequent rule breaking, parents often wonder if they will have control of their preschoolers in an emergency. The answer is yes. Children know that their parents are smarter and stronger than they are and that parents will protect children from danger. In everyday matters, however, children will continue to balk at parental authority. It takes a preschooler a long time to teach her parents that she will no longer think the way parents say she should, that she is a separate individual person, and that she must be allowed to be herself.