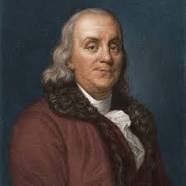 Benjamin Franklin was born on January 17, 1706, to a large family in the British colonial city of Boston.  Franklin's father was a soap maker who dreamed that his son would grow up to become a preacher.  Franklin's father sent  young Benjamin to school when he was 8 years old, but later withdrew Ben after only two years of schooling.  Despite having so little formal education, Benjamin Franklin went on to become one of the greatest champions for American independance in colonial America.  However, before his political career bloomed, Franklin worked as a printer, writer, and publisher.  Using his talents as a persuasive writer, and the fact that he owned of a printing shop, Franklin was able to spead the call for American independance throughout the colonies.