In the previous pages, we talked about UPVC pipes and said that Pimtas is one of the largest manufacturers of these pipes in Asia. We also talked about the features and benefits of  Pimtas UPVC pipes. But it is interesting to know that in addition to UPVC pipes, Pimtas company also produces PVC pipes. In this page, we want to examine the differences between UPVC pipes and PVC pipes.

Polyvinyl chloride, or PVC for short, is a type of plastic used in the world that its consumption increases by more than 4% every year. This type of pipe is especially used in the construction industry. It also plays an important role in health, transportation, packaging, design and art. PVC entered the market with the slogan of replacing copper and aluminum pipes. Ease of use of PVC pipes is another reason for its economic growth. In such a way that it can be made in different sizes and connected with a special thermal glue. Its components are vinyl and chlorine.
They can be softened by adding additives such as phthalates. Adding substances such as calcium also increases the life and strength of PVC.

UPVC, first produced in the laboratory in 1912, is often composed of rock salt and oil, which turns into a white powder after several chemical processes.
UPVC pipes are rigid and durable, but at the same time they can be deformed under pressure. This prominent feature is important in construction, especially in windows and door profiles.
Due to their composition, these pipes are highly resistant to weather conditions and rot. And even at high temperatures, such as 60 to 80 degrees Celsius, they are normal and unchanged, and do not change color or shape. In the composition of UPVC pipe raw materials, zinc and calcium are used instead of lead, which makes it more compatible with the environment and is more resistant to the absorption of air pollution. 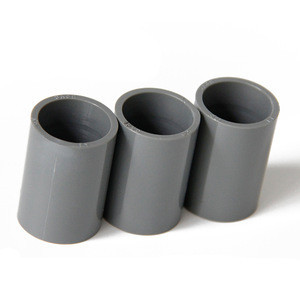 The difference between UPVC pipe and PVC pipe

Both are mostly made of the same material. PVC polyvinyl chloride is a polymer that can be heated and molded to form very hard and strong compounds such as pipes. Because of its rigid properties once formed, manufacturers often attach polyester polymers to PVC. These polymers make PVC pipes more flexible and generally make the job easier. When UPVC is produced, these plasticity factors are eliminated, which increases the physical and chemical resistance of the pipe.