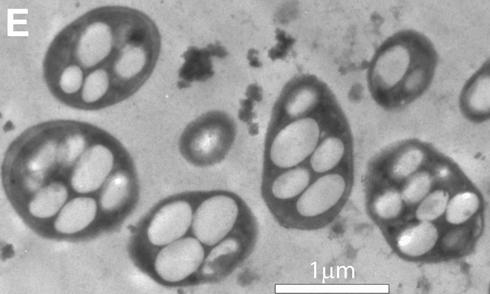 Reported in the journal Science, by a team led by Felisa Wolfe-Simon of the NASA Astrobiology Institute in Menlo Park, Calif., the Halomonadaceae bacterium turned up in a survey of the salty and arsenic-rich Mono Lake.

"Biological dependence on the six major nutrient elements carbon, hydrogen, nitrogen, oxygen, sulfur, and phosphorus is complemented by a selected array of other elements, usually metal(loid)s present in trace quantities that serve critical cellular functions, such as enzyme co-factors. There are many cases of these trace elements substituting for one another," says the study. "However, there are no prior reports of substitutions for any of the six major elements essential for life. Here we present evidence that arsenic can substitute for phosphorus in the biomolecules of a naturally-occurring bacterium."

After culturing the bacterium for survival on arsenic, the scientists report the bug uses the poisonous element in place of phosphorus, the key ingredient in most fertilizers, in its metabolism.

The finding had excited a great deal of attention in some media circles after NASA announced a press conference, "to discuss an astrobiology finding that will impact the search for evidence of extraterrestrial life."

The study itself does not describe any alien life implications for the bacterium, bred from the bug found originally in an Earthly lake.