etching.  Corot was the leading painter of the Barbizon school of France in the mid-

He is a pivotal figure in landscape painting and his vast output simultaneously references the neo-classical tradition and anticipates the plein air innovations of Impressionism. 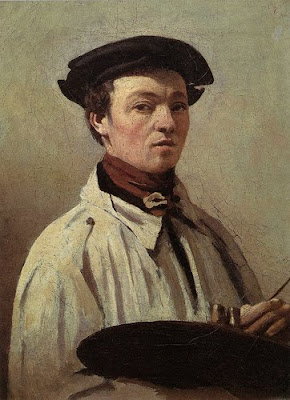 His Birth &  His Early Life
On July 16, 1796, Camille Corot was born in Paris.  His mother, who was Swiss born, had a fashionable milliner's shop,

which Corot's father, a draper by trade, helped manage.   He was a poor scholar and even less adept when he tried to follow

his father's trade.   Finally, at age 25, he was given a small allowance by his father and allowed to become  what he had

always dreamed of being . . . a painter.   Like every young French artist, Corot spent much time studying the paintings in the

Louvre, and he had some private instruction from Achille Etna Michallon and Jean Victor  Bertin, both followers of the

outdoors, rather than  in studios, sketching what he saw and learning by firsthand experience.

In the autumn of 1825 Corot went to Rome, and the three years that he spent there, were  the most influential years of his

life.  He painted the city and the Campagna, and the countryside  around Rome.  He made a trip to Naples and Ischia.  He

returned to Paris by way of  Venice.  He told a friend in August 1826, “All I really want to do in life, is  to paint landscapes.

This firm resolve will stop me forming any serious attachments.   That  is to say, I shall not get married.”  He was as good as

his word, and never married.

His life was entirely devoted to painting.

Back in France, Corot settled into a routine to which he kept for the whole of his life.  He  always spent the spring and

summer months painting outside, making small oil sketches and drawings from nature.  He acquired a mastery of tonal

relationships that formed the basis of his art, for the balance and gradation of light and dark tones was always more

important to him than the choice of color. In the winter Corot would retire to his Paris studio to work on some much larger

pictures, which he liked to have ready for exhibition at the annual Salon when it opened in May.

His first important work, The Bridge at Narni, was shown at the Paris Salon in 1827, when he was still in Italy. In 1833 he

exhibited a large landscape of the forest of Fontainebleau, which was awarded a second-class medal: this gave Corot the

right to show his pictures without submission to the jury for their approval.

From May to October of 1834 Corot made his second visit to Italy. He painted views of Volterra, Florence, Pisa, Genoa,

Venice, and the Italian lake district. He collected enough material in small sketches to last him the rest of his life,

although he returned to Italy briefly in the summer of 1843, for the last time.

In 1830 the tumult of the July Revolution drove the politically indifferent Corot to Chartres, where he painted Chartres

Cathedral, one of his most originally composed early pictures.

In 1831 the Salon accepted several of his Italian and

French scenes, although they generally received little notice, the critic Delecluse remarked on their originality.  In 1833

Corot's Ford in the Forest of Fontainebleau earned a second class medal, although he also received this award in 1848

and 1867, the first class medal was always denied him.

Corot's reputation grew steadily if undramatically. In 1840 the state acquired his Little Shepherd for the Metz museum, yet

in 1843 the Salon jury rejected his Destruction of Sodom. In 1845 he was commissioned to paint a Baptism of Christ for

the church of St. Nicolas du Chardonnet in Paris. He received the cross of the Legion of Honor the following year. At this

standard catalog of the painter's work.

During the liberalized Salon of 1848 Corot was a member of the jury and served again in this capacity the following year,

and the state made further purchases of his work for the museums of Douai and Langres. It was only at the Salon of 1855,

however, when the Emperor bought his Souvenir de Marcoussis that Corot achieved real fame and began to sell his work

In the final few years of his lifetime Corot brought in great amounts with his paintings as they were in large demand. In

1871 he contributed to the poor of Paris which at the time was under military blockade by the Prussians. In the literal Paris

Commune he had been at Arras with Alfred Robaut. In 1872 he purchased a house in Auvers for Honore Daumier, who at the

time was blind, lacking funds and homeless. In 1875 he gave funds to the widow of Millet to aide her children. His charity

was close to proverbial. He likewise financially held up the keep of a day care for children in Paris.

Jean Baptiste Camille Corot's open air natural landscapes paved the way for the advent of impressionism.  He himself said

of his artistic abilities, "Never leave a trace of indecision in anything whatever."  In his own lifetime, he assisted his fellow

contemporaries, including Honore Daumier, and was considered the ideal man of charity and kindness.

More Of His Paintings

The Colosseum Seen Through The Arcades Of The Basilica Of Constantine 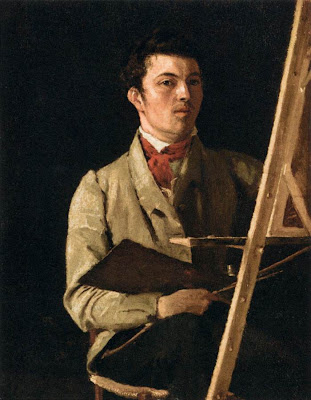