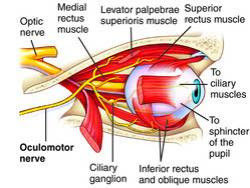 DESCRIPTION and FUNCTION: The name oculomotor means "eye mover." This nerve supplies FOUR of the six extrinsic eye muscles that move the eyeball in the orbit (Figure 3A).  See cranial nerves IV Trochlear and VI Abducens which also function to move the eye.

The function, as indicated by its name, is chiefly motor. Besides innervating the four muscles, it also includes parasympathetic motor fibers to the muscle of the iris, sphincter pupillae, which causes the pupil to constrict and to the ciliary muscle which controls lens shape for visual focusing.  The oculomotor nerve also contains some sensory afferents, specifically proprioceptors.

ORIGIN and COURSE: Fibers extend from ventral midbrain, near its junction with the pons, and pass through the bony orbit to the four eye muscles: inferior oblique and superior, inferior, and medial rectus muscles.

CLINICAL TESTING: Pupils are examined for size, shape, and equality. Pupillary reflex is tested with penlight: pupils should constrict when illuminated. Convergence for near vision is tested as is the subject's ability to follow objects with the eyes.

HOMEOSTATIC IMBALANCE: In oculomotor nerve palsy (Figure 3B), the eye cannot be moved up, down, or medial (inward), and at rest, eye rotates laterally because the actions of the two extrinsic eye muscles not served by this nerve (IV Trochlear--superior oblique muscle and VI Abducens--later rectus muscle) are still functioning and unopposed. The upper eyelid also droops (ptosis) and the person has double vision and trouble focusing on close objects.