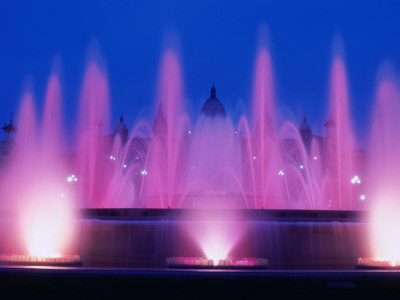 Barcelona’s biggest ornamental fountain, which was built in 1929 for the International Exhibition, offers a spectacular display of music, water acrobatics and lights which generate over 50 kinds of shades and hues. The Montjuïc Magic Fountain has become one of Barcelona’s most popular attractions and is where the “Piromusical” is held, a true balletic spectacle of water and light.

La Sagrada Familia was originally conceived by the Catalan publisher Josep Bocabella as a work of expiation for the city's increasingly revolutionary ideas. Work began in 1882 by public subscription on a design by architect Francesc de Paula Villar, which proposed a simple church in a traditional neo-Gothic style.