FAMOUS WARRIORS IN THE GREAT WAR ! - Achilles: A great warrior who was dipped in the river styxx to become invicable. So when his mother dipped him in there his whole body was wet except for his foot because his mom had to hold him a type of way since he was a baby. Then he grew to become the mos respected, arragent, greatest warrior to have lived 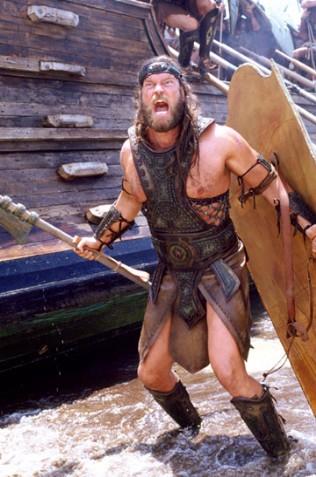 Ajax the greater  -   Ajax,son of Telamon, king of Salamis, a great hero of ancient Greece. To seperate him from Ajax, son of Oileus, he was called "Ajax the Great". In Homer's Iliad he is described as of great stature and colossal frame, second only to Achilles in strength and bravery, and the 'bulwark of the Achaeans'. He is not hurt in any of the battles described in the Iliad, and he is the only principal character on either side who does not receive personal assistance from any of the gods who participate in any of the battles.

During the Trojan War, Ajax battled Hector while Achilles sulked over an argument with Agamemnon. Ajax wounded but did not kill hector. He did kill Phorcys. During the fight over the body of Patroclus, his prayer to the gods to clear the fog which has descended over the battle is promptly granted by Zeus. In Homer's Odyssey, with the aid of Athena, Ajax rescued the body of Achilles from the hands of the Trojans. In the competition between him and Odysseus for the armour of Achilles, Agamemnon, at the instigation of Athena, awarded the prize to Odysseus. This so made Ajax so furious that it caused his death. According to a later and more explained story, his disappointment drove him mad; he rushed out of his tent and fell upon the flocks of sheep Oddysseus - He is known for his cunning and clever. He is the son of of the king or Ithaca. Odysseus was one of the original suitors of Helen of Troy. When Menelaus succeeded in winning Helen's hand in marriage, it was Odysseus who advised him to get the other suitors to swear to defend his marriage rights. However, when Menelaus called on the suitors to help him bring Helen back from Troy, Odysseus was reluctant to make good on his oath. He pretended to have gone mad, plowing his fields and sowing salt instead of grain. Palamedes placed Odysseus' infant son in front of the plow, and Odysseus revealed his sanity when he moved to avoid injuring the child.

However not sure he may have been to join the expedition, Odysseus fought like a hero in the Trojan War, refusing to leave the field when the Greek troops were being routed by the Trojans, and leading a daring nocturnal raid in company with diomedes. He was also the originator of the trojan horse , the strategem by which the Greeks were finally able to take the city of Troy itself. After the death of achillies, he and ajax competed for Achilles' awsome armor when Odysseus' eloquence caused the Greeks to award the prize to him, Ajax went mad and killed himself.

Odysseus' return from Troy, chronicled in the Odyssey, took ten years and was bested by perils and misfortune. He freed his men from the awsome-giving drugs of the Lotus-Eaters, rescued them from the cannibalism of the cyclops and the enchantments of people. the terrors of the underworld with them, and while in the land of the dead Hades allowed Thiresias, Odysseus' mother, ajax and others to give him adivice on his next journey. They gave him important advice about the cattle of the sun (which appolo herds), scylla and Charybdis and the Sirens. From there on the travels were harder for Odysseus, but they would have been much worse of it wasn't for the help of the dead.
With this newly acquired knowledge, he steered them past the perils of the Sirens and of Scylla and Charybdis. He could not save them from their final folly, however, when they violated divine commandments by slaughtering and eating the cattle of the sun-god. As a result of this rash act, Odysseus' ship was destroyed by a thunderbolt, and only Odysseus himself survived. He came ashore on the island of the nymph Calypso, who made him her lover and refused to let him leave for seven years. When Zeus finally intervened, Odysseus sailed away on a small boat, only to be shipwrecked by another storm. He swam ashore on the island of the Phaeacians, where he was magnificently entertained and then, at long last, escorted home to Ithaca.