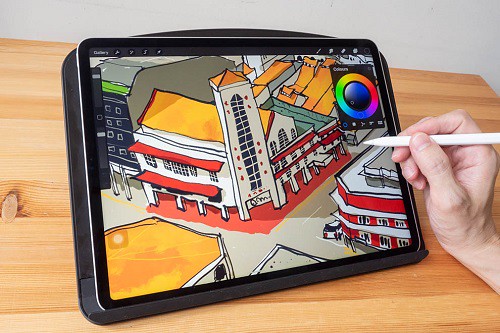 I have both the XP-Pen Artist 13.3 Pro art drawing pad with screen 13.3inch and iPad pro 12.9inch. iPad pro so far I have to admit is amazing.

Portable and easy to use, iPad Pro helped me draw and deliver illustrations while on the aeroplane, on the beach, in bed and in beautiful cafes around the globe.

Creating print-ready illustration on the go is now possible with an initial investment into an iPad Pro, Apple Pencil, and a few free Adobe apps.

Thanks to these new tools being an illustrator don't mean living an isolated home-bound experience like it used to be. 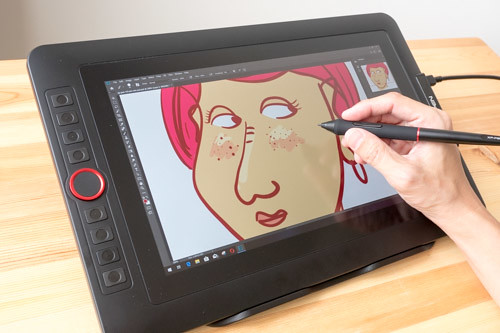 I'm very happy with it and I've been using it for a year-ish and have had zero problems. I love having programmable buttons as I have pain in my thumb from copy/pasting and other repetitive keyboard commands, so that helps. Easy to set up, easy to customize for each application.

Maybe not for you, but maybe this'll help someone else on the market for a reasonable graphics tablet.

So, you have decided to purchase a drawing tablet. What should you go for: a XP-Pen or an iPad Pro?

Each of these tablets has their pros and cons and a few distinctive differences.

1. The ability to see the image that you are drawing directly on the tablet.

When you purchase an iPad Pro you would be able to see the image that you are drawing, as if it was on paper.

To get the same effect with a XP-Pen tablet you will have to go for a higher spec Artist Pro Series , which need plug in a laptop.

iPad Pro functions independently from your laptop or PC, so you will have a self-sufficient drawing device everywhere you go.

The models of xp-pen artist have to be plugged into a computer in order to mirror the screen. its just a display. it has no processing power or battery. all cintiqs need a computer.

XP-Pen is used to mirror the screen of your laptop or PC, so you will essentially be using the desktop version of the software such as Illustrator or Photoshop.

XP-Pen Artist 13.3 Pro is great for use with full Adobe apps on desktop like touching up images in photoshop or creating artwork in illustrator.

iPad Pro is a mobile device, so you would be able to use various apps which have been specifically adapted to deliver smooth mobile drawing experience.

The main issue with the iPad is that you're limited to iOS apps like procreate . There really aren't any fully-featured animation or 3D modelling apps yet.

Procreate on iPad pro is fabulous and can create printable work up to certain sizes, especially if your main purpose is for web, definitely iPad pro is enough. I absolutely love it.

But Recently, there has been some development in animation apps for iPad Pro, which is also very useful for a contemporary illustrator.

You don't have to use your iPad Pro only for drawing. It will come in useful in other life scenarios, such as checking emails, sharing images on social networks, editing videos and lots more! With XP-Pen, you will not be able to use it for anything else.

Let's compare the two types of tablets in detail.

The ease of drawing with a stylus.

XP-Pen is a professional and well-known provider of creative digital devices like graphic tablets, drawing pen displays and digital pen stylus. XP-Pen Artist 13.3 Pro screen tablet are better when it comes to the most natural feel of drawing on a digital device. it gives me the realistic and precise drawing experience.

If you try an iPad Pro in the store you will notice that its surface is much more slippery. I know plenty of illustrators who like it, but if you are after a more paper-like feel then you can buy a cheap matt screen sticker (I use this one) which will add grip to the screen. Apple is also constantly improving the Apple Pencil, which in itself is quite a sophisticated tool. the iPad pro are good for rough sketching or lineart.

The next argument that the drawing tablet supporters usually give is that graphics tablet works with full versions of Illustrator and Photoshop, providing excellent choice in file resolution and functions.

And indeed, there was a limit in file sizes and resolutions available in apps when iPad Pro first came out. However, the situation is different now. Firstly, Procreate app has always offered a good choice in image resolution and formats. Moreover, Adobe CC developed some amazing iPad apps. You can now get Adobe Fresco, which works with any size and resolution and offers mind blowing tools and brushes.

The two older Adobe drawing apps are Adobe Photoshop Sketch and Adobe Photoshop Draw. They seamlessly integrate with Adobe desktop apps through Creative Cloud. With all these apps you will be able to draw in both vector and raster graphics.

When choosing between XP-Pen Artist and Apple iPad Pro, ask yourself the following questions: Do I want to draw in full desktop version of Photoshop with all its functions? If the answer is yes, then XP-Pen is more suitable for you.

I would say a full desktop would have better art programs. Especially if we are talking free. If you just want to doodle, it doesnt matter. If your going to be doing any serious art however, Get a XP-Pen Artist or wacom cintiq tablet. You get many times more freedom on a desktop.

Sidecar , Astropad or Duet Pro app lets you mirror your iPad Pro display, thus turning it into a pen display tablet. But My ipad would overheat (with astropad and duet) and it lags a lot, to the point that it starts making random lines when trying to draw.

How important is it to be able to draw anywhere I want? If you want a light tablet that you can take with you anywhere, iPad Pro is perfect for you.

Do I like to try new mobile apps? If the answer is yes, you will have a lot of fun testing various drawing and animation apps available for iPad Pro. If, however, the thought of exploring new technology gives you more stress than excitement, then you might find it easier to learn how to use XP-Pen, which simply mirrors a desktop version of Photoshop.

Both have different uses and advantages, eventually it comes down to what is your main purpose. My suggestion, if using it professionally, is to buy the one you need first then buy the second later. Both work for me in my line of work. If your main use is adobe desktop apps then the XP-Pen Artist 13.3 Pro. Professionally, both benefit me.