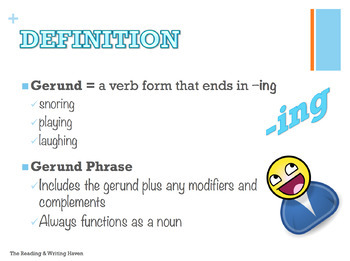 A gerund is a verb form that becomes a noun.  Whatever a noun can be in a sentence, the gerund can be as well.

Gerunds can be the following in a sentence:

***Gerunds do not necessarily use commas except in 2 cases—when a gerund is the object of an introductory prepositional phrase that is longer than three words, or it is part of an appositive.  (There are grammar rules dealing with these instances.)

Remember that gerunds must end with ING!  But not all ING verbs are gerunds. It all depends on how the ING word is being used.

A gerund phrase is a phrase that begins with a gerund.  To that are added prepositional phrases, adjectives, and adverbs.  Just like a single worded gerund, you can not remove the gerund phrase from the sentence.  ***Remember the entire gerund phrase becomes one giant noun.