**Average  paragraph should be 5 to 7 sentences.** 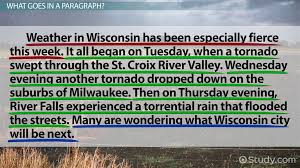 Sunset is the time of day when our sky meets the outer space solar winds. There are blue, pink, and purple swirls, spinning and twisting, like clouds of balloons caught in a blender. The sun moves slowly to hide behind the line of horizon, while the moon races to take its place in prominence atop the night sky. People slow to a crawl, entranced, fully forgetting the deeds that still must be done. There is a coolness, a calmness, when the sun does set.

On July 16, 1969, the Apollo 11 spacecraft launched from the Kennedy Space Center in Florida. Its mission was to go where no human being had gone before—the moon! The crew consisted of Neil Armstrong, Michael Collins, and Buzz Aldrin. The spacecraft landed on the moon in the Sea of Tranquility, a basaltic flood plain, on July 20, 1969. The moonwalk took place the following day. On July 21, 1969, at precisely 10:56 EDT, Commander Neil Armstrong emerged from the Lunar Module and took his famous first step onto the moon’s surface. He declared, “That’s one small step for man, one giant leap for mankind.” It was a monumental moment in human history!