A DIRECT OBJECT is a noun or a pronoun that follows an ACTION VERB in a sentence.  It is never in a prepositional phrase.  You find it by asking WHAT or WHO after the ACTION VERB.

How to find a DIRECT OBJECT:

DIRECT OBJECTS can be compound.  (That’s two or more.)

HOMEWORK:  DO THE FOLLOWING WORK ON A SEPERATE PIECE OF PAPER.

1. The nobles wore steel armor and helmets.
2. He was a successful warrior thanks to his great war horse.

3. Women in splendid gowns attended the tournaments.
4. Aknight would often throw a scarf to his lady during the events.
5. People of the Middle Ages respected chivalry, bravery, and honor.
6. Medieval students studied the craft of alchemy.
7. Travelers took shelter in a castle or monastery.
8. Educated nobles enjoyed the tales of Chaucer and the poetry of Petrarch.
9. King Edward III’s son was the Black Prince.
10. King Edward III started a war with France.

EXERCISE B Underline the direct objects in the following sentences.

11. In 1346, trading ships carried infected black rats into Italian ports.
12. Fleas on the rats spread a dangerous disease.
13. The bubonic plague killed thousands throughout Europe until 1352.
14. It attacked people of all ages.
15. Medieval doctors found no cure for the plague.

EXERCISE  "C" In the following sentences, underline the direct objects.

1. Did our neighbor stake her new plants?
2. Have you read those chapters yet?
3. Had the enormous whirlpool trapped the schooner?
4. Dad and Mom planted decorative native grasses along the back fence.
5. Letitia, Ira, and Colin helped the pep squad and me with the goal post decorations.
6. After you remove all liquid from this solution, determine the amount of sodium remaining.
7. Once a week, Pearl added a fictional adventure to her journal.
8. Travel agents usually can answer questions about your destination.
9. During today’s practice, Coach wants cooperation.
10. Where does Mr. Jepson keep the markers, poster board, and gluesticks for this project?
11. Everyone cheered the football team wildly because it had reached the state finals.
12. At the farmer’s market we will buy spring onions, black-eyed peas, and peaches.
13. What great coordination Odelle, Jillian, and you bring to our defense!
14. For the awards banquet next month, invite someone as your guest.
15. Six of Eliot’s great-grandchildren attended his ninetieth birthday party yesterday.
16. Graph the tallest mountains in the fifty states.
17. DeNiequa should be taking both of you with her when she buys groceries.
18. Mei-Ling watched the toolmaker as he finished the point on the shovel.
19. How much oil do sunflower seeds yield per pound?
20. What a wonderful fabric you have selected for the upholstery on the sofa and chairs! 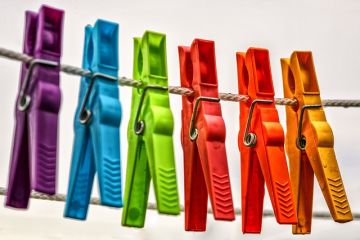 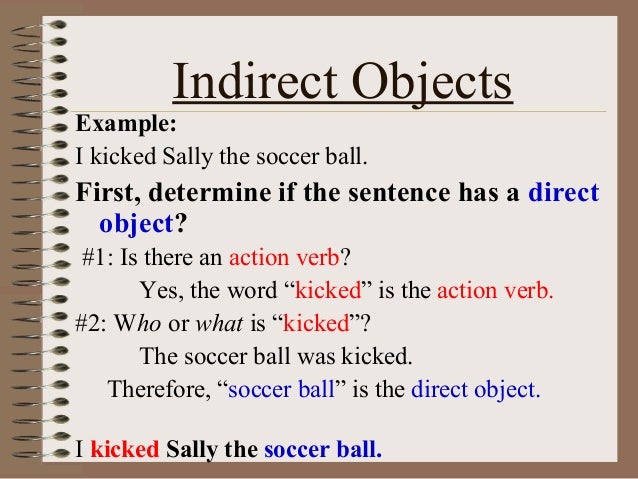 Find the INDIRECT OBJECT by:

Find the INDIRECT OBJECT in the following sentences:

HOMEWORK:  DO THE FOLLOWING HOMEWORK ON A PIECE OF PAPER.

1. Are you reading the book I gave you?

2. I mailed my brother the birthday gift.

5. Please send me a copy of the letter.

6. The flight attendant offered the passengers drinks and snacks.

7. Are you going to buy plates and napkins for the picnic?

8. The dog chased its tail for several minutes.

9. Please hand me the pitcher of orange juice, Franco.

10. Have you given Janice your answer yet?

EXERCISE B Underline the indirect objects in the following sentences.

Aunt Maria brought me a souvenir from 12. .

13. The driver told the officer his version of the accident.

EXERCISE C:  Follow the Directions for Excercise A above.

Example 1. Please take him these sandwiches.

1. The committee chairperson gave her the gavel.

3. The interview will give Emily a chance to visit the college.

4. The algebra teacher lent her a new ruler.

5. Aerobic dancing provided us an opportunity for vigorous exercise.

6. The track star jumped hurdles and ran relays during the meet.

7. The pet store owner gave the puppy a bone.

8. The doctor prescribed penicillin for the child’s illness.

9. The counselor offered the students some advice.

10. Their discovery of radium and polonium earned Pierre and Marie Curie the Nobel Prize

12. The president signed the energy bill after the congressional vote.

14. The tree branch struck the car’s windshield with a crash.

15. Toni Morrison read the audience an excerpt from her novel.

Definition:  A predicate nominative (PN) is a noun or a pronoun that comes after a liking verb.  Its function is to rename the subject.  You find it by asking WHAT or WHO after the linking verb.  It can never, ever be in a prepositional phrase.

Here are the steps in finding a predicate nominative (PN):

The answer is UTOPIA.  Utopia renames the subject car.

***A predicate nominative can be compound.

HOMEWORK:  DO THE FOLLOWING WORK ON YOUR OWN PAPER

EXERCISE A Underline each predicate nominative in the following sentences.

Example 1. Did Peter become the new captain of the team?

1. Louis is a mathematician and a teacher.
2. Were those two girls the winners?
3. After years of hard work, she became a superb ballerina.
4. Should Barney have been the leader of this team?
5. What an excellent singer she is!
6. The pianist is a composer, also.
7. Mrs. Woodward became an excellent nurse.
8. Her doves’ names are Juliette, Musetta, and Luigi.
9. What a mistake that could have been!
10. My father has been an engineer, a scientist, and a professor.

EXERCISE B Underline each predicate nominative in the following sentences.

Example 1. The leader will be Maria.

1. My partner for biology lab is Penelope.
2. Jason will be the next student council president.
3. Mrs. Furillo’s favorite song is still “Night and Day.”
4. Rocky Marciano was the world heavyweight boxing champion from 1952 to 1956.
5. My coat is the red one.
6. Leon would have been my first choice for the part.
7. Michelle Kwan has become an inspiration to us all.
8. Is Sara the runner in the blue T-shirt?
9. I could have been a contender.
10. The winner of the spelling bee was Tracy.
11. The next speaker will be Mr. Gonzalez.
12. Who was the fourteenth president of the United States?
13. My favorite memory of the trip is our day at the Grand Canyon.
14. At the age of eighteen, my father became the first person in his family to go to college.
15. Were the stars of that movie Lauren Bacall and Humphrey Bogart?
16. The winner is Terry!
17. Did Sheila become an accountant?
18. Grace’s preferences for lunch are sandwiches or soup.
19. The next contestant on the show is Mr. Hynes.
20. Ginger should have become an actress. 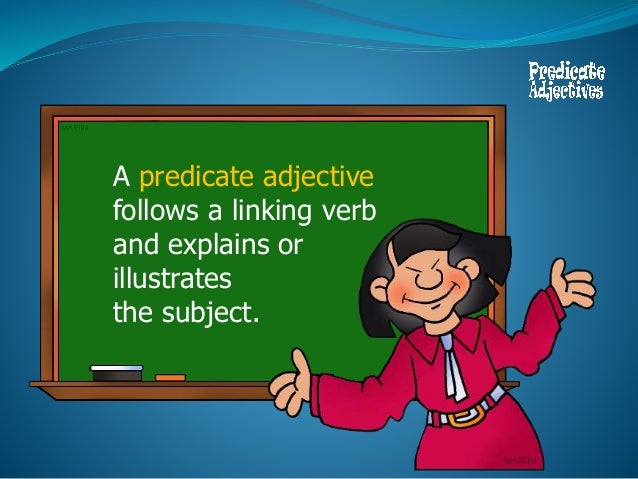 A predicate adjective (PA) is an adjective that comes after a linking verb in a sentence.  Its job is to describe the subject of the sentence.  A sentence does not have to contain a PA.  To find the PA, ask WHAT or HOW after the linking verb.  REMEMBER the PA must describe the subject.  To check if you have identified the PA, move the PA in front of the subject.  If it describes the subject, you found it.  ***Predicate Adjectives can not be in a prepositional phrase.

Use these steps to find the PA:

You can have a compound predicate adjective.  A compound PA is two or more PAs in the same sentence.

Over the years my house has been white, blue, and yellow.

The baker is messy.

His new car was red, small, and sporty.

After the class meeting, LaToya ate a piece of cake.

The creepy, greenish caterpillar was hairy and spikey.

HOMEWORK:  DO THE FOLLOWING WORK ON YOUR OWN PAPER

The Subject Complement: Predicate Adjectives
A subject complement is a word or word group that completes the meaning of a linking verb
and identifies or modifies the subject.

(2) A predicate adjective is an adjective that is in the predicate and that modifies the subject of a
sentence or a clause.

EXAMPLES He is becoming stronger. I heard that the joke you told was humorous.
How ridiculous I felt! The children seem lively and mischievous.

EXERCISE A Underline each predicate adjective in the following sentences.

Example 1. Did the baby seem restless and nervous this morning?

1. Carlos has grown much taller through the years.
2. Does the soup taste too salty to you?
3. How beautiful her voice is!
4. The seas appear calm this morning.
5. The kitten looked quite content in its new box.
6. The modern music sounded odd to us.
7. Does Jorge seem happy in his new home?
8. The roses from the bush outside smell sweet.
9. François is satisfied with his new job.
10. How soft and delicate the baby bird seems!

11. How the sunset is this evening!
12. Lin often feels after soccer practice.
13. As the sky grew darker, the stars grew .
14. Jennifer seems about winning the award.
15. This ghost story is than I remembered.

EXERCISE B: Underline each predicate adjective in the following sentences.

EXERCISE In each of the following sentences, circle each linking verb and underline all predicate
adjectives.

Example 1. Was the new airplane smaller and faster than the older planes?

1. Our cat Conrad is small for his age.
2. The boiled potatoes tasted a little too bland for me.
3. Belinda sounded optimistic about the outcome of the student council election.
4. Parker looks very nice in that hat.
5. Sales of the new school calendar appear brisk.
6. The llama’s fur felt soft to Marcia’s touch.
7. The door to the basement is squeaky.
8. After his feeding, the baby remained quiet for the rest of the night.
9. The crowd at the championship game was energetic and enthusiastic.
10. Michael’s new wool coat felt rough and scratchy against his skin.
11. Lance didn’t become tired until the final lap of the race.
12. The maze can be frustrating and tiring.
13. The moon appeared big and bright in the evening sky.
14. The bittersweet comedy seemed both funny and sad.
15. The soup may be too hot to eat right now.
16. Have you ever been afraid of the dark?
17. The trail of the meteor appeared blue, green, and red.
18. Every day, Taylor grew more confident about riding her new unicycle.
19. Is your new dog brown and white?
20. Climbing the steep slope of the mountainside is really quite easy, despite its appearance. 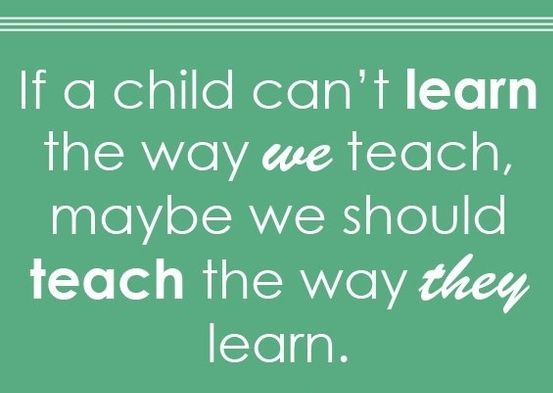