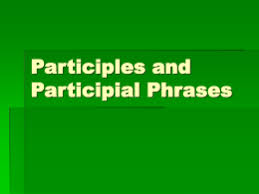 A participle is a verb form that acts as an adjective.  In other words, it looks like a verb, but it describes a noun.  Participles must end in one of the following endings:  ED, EN, ING, and sometimes T.

Grill is a verb.  If I add ED to GRILL, I can turn GRILLED into an ADJECTIVE.

I like to grill corn.  (In this sentence grill is a verb.)

I like grilled corn as a snack.  (In this sentence GRILLED has turned itself into an adjective.  GRILLED describes corn.

Jenny is running in the big race today.  (In this sentence running is a verb.)

The running water was very swift and dangerous.  (In this sentence, RUNNING has turned itself into an adjective.  RUNNING describes the water.)

3.  Sentence Participial Phrase (no comma is needed because the Part. Phrase does not interrupt the sentence)

Dancing like a teenager, granny seemed to be having a lot of fun.  (The Part. Phrase is DANCING LIKE A TEENAGER.  It is one long adjective that describes granny.  A COMMA is needed since it interrupts the beginning of the sentence.  It can be removed.

The old car, wheezing really loudly, is on its last legs.  ( The Part. Phrase is WHEEZING REALLY LOUDLY.  It describes the car.  A COMMA is needed before it starts and after it ends as it interrupts the middle of the sentence.)

FIND THE PARTICIPLE or PARTICIPIAL PHRASE:

Shouting like a crazed person, Max accused everyone of talking about him.

In the box Hector, snooping like a little child, found his birthday gift.

The little dog gnawed on the shoe.

I ordered a salad tossed with extra dressing and croutons.

EXERCISE A Underline the participle in each of the following sentences. Then, circle the noun it modifies.

Example 1. The thrashing winds of the tropical storm damaged our city park.

1. Our excited meteorologists told us that the storm’s name was Clive.
2. It was the first storm in recorded history to reach our town.
3. The worried townspeople hastily nailed up boards and filled sandbags.
4. My grandparents recalled a similarly chilling storm from their youth.
5. When the storm hit, everyone hunkered down in their mildewing basements.
6. Several hours later, the storm abated and relieved neighbors came up to see the damage.
7. The surprised townspeople found, to their delight, that only the city park needed repairs.
8. Uprooted trees had fallen on the playground.
9. Several dozen energized volunteers worked together to cut up and stack the branches.
10. Only a few days later, delighted children were once again playing on the swings and slides.

Example 1. Everyone has read stories of knights made famous for brave deeds.

1. Few people know about the process required to become a knight.
2. By the twelfth century, a program, challenging to both mind and body, had been developed.
3. Boys, growing up in noble households, began training for knighthood at a young age.
4. Leaving their family homes, they were fostered in the houses of influential friends or uncles.
5. The boys learned etiquette, cared for horses, and exercised to build the musculature needed to
carry heavy arms.
6. Demonstrating his ability to hunt, fence, and ride, a fourteen-year-old became a squire.
7. At about the age of twenty-one, well-trained in arts of defense, the young man was ready to
undergo initiation into knighthood.
8. The ritual usually began when the squire, freshly bathed, put on ceremonial robes of white
and red.
9. He spent the night in the chapel and offered his sword, blessed by a priest, to the service of
his lord.
10. Now called an acolyte, the young man put on his best clothes and went in to a breakfast feast. 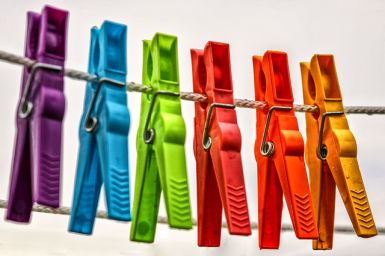 A gerund is a verb form that becomes a noun.  Whatever a noun can be in a sentence, the gerund can be as well.

Gerunds can be the following in a sentence:

***Gerunds do not necessarily use commas except in 2 cases—when a gerund is the object of an introductory prepositional phrase that is longer than three words, or it is part of an appositive.  (There are grammar rules dealing with these instances.)

Remember that gerunds must end with ING!  But not all ING verbs are gerunds. It all depends on how the ING word is being used.

A gerund phrase is a phrase that begins with a gerund.  To that are added prepositional phrases, adjectives, and adverbs.  Just like a single worded gerund, you can not remove the gerund phrase from the sentence.  ***Remember the entire gerund phrase becomes one giant noun.

HOMEWORK:  DO THE FOLLOWING EXERCIES ON YOUR OWN PAPER.

EXERCISE In the following sentences identify the gerund.

EXERCISE Identify the gerund phrase in each of the following sentences.

Example 1. We eagerly anticipated diving into the icy water.

1. Jumping out of airplanes sounds scary to me.
2. Our reason for calling you is to invite you to our graduation.
3. I don’t mind shoveling snow once in a while.
4. Skidding on wet pavement causes many accidents.
5. You will enjoy meeting Hatim.
6. Sweating over a hot stove in August is not fun.
7. My favorite weekend activity is singing with a local band.
8. Achieving a perfect score gave Molly a sense of pride.
9. Instead of subtracting the service charge, Chad added it.
10. Daydreaming about problems can be a source of creative solutions.
11. After dining at a nice restaurant, they went to a movie.
12. His idea of a pleasant Saturday is fishing from the bridge.
13. One service club’s holiday project is caroling at the hospital.
14. Nicole’s sisters enjoy skating in the park.
15. By shopping early in the morning, we will get the freshest produce.
16. My hobbies include reading mysteries and biographies.
17. His arms were sore after kneading the dough for ten pizzas.
18. Choosing a college to attend can be overwhelming.
19. Mike doesn’t like waiting for the bus at night.
20. Her part-time job is packing computer components at the factory. 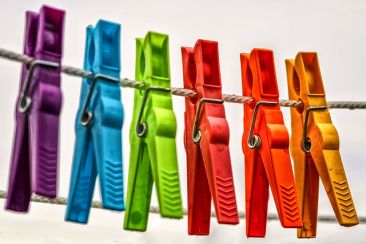 An INFINITIVE is a verb form that becomes an adjective, adverb, or noun in a sentence.  Infinitives must (except in the case of a split infinitive) with the word TO followed by a VERB.

Steps in finding the infinitive:

[There is no infinitive.  To the store is a prepositional phrase.  ***Remember, an infinitive is TO +  VERB!]

An INFINITIVE PHRASE starts with an infinitive and to that infinitive can be added prepositional phrases, adjective, and adverbs.

***An infinitive phrase may or may not employ the use of commas.  It all depends how the infinitive is being used in a sentence.

Steps in finding the infinitive phrase:

[The infinitive phrase is to go into the garage now!]

A split infinitive happens when the writer adds and adverb between the TO and the verb.  The writer SPLIT the infinitive in two.

[The adverb boldly splits the infinitive in half.]

EXERCISE A Underline the infinitives in each of the following sentences.

Example 1. Awell equipped the study area to have all supplies handy.

1. I like to keep my stapler and tape right at hand.
2. The dictionary is on the next shelf, ready to answer my questions about spelling.
3. To succeed in math is a special goal of mine.
4. I often use a calculator to check my work.
5. I intend to study for my next algebra exam.
6. I also need to complete an essay for my history class.
7. That’s a project to begin early!
8. I keep an alarm clock on my desk to remind me of how much study time remains.
9. To concentrate for an hour is sometimes a challenge.
10. I am sure to excel in my classes if I stick with my study habits.

EXERCISE Underline the infinitive or infinitive phrase in each sentence.

Example 1. In our house, we use the hall to display photos of our family.

1. The pictures to see are my family’s baby pictures.
2. Of course, to call my own baby pictures anything but beautiful would be lying!
3. To record the growth of our family is another of our goals.
4. We keep many family pictures in our house to remind us of the importance of our past.
5. I like to study the old, crumbling photo of my great-grandparents.
6. The photographer chose to take the picture on my great-grandparents’ porch.
7. I use looking at this picture as a way to imagine how hard they worked on their farm.
8. I never met them, but I am told that they managed to raise corn, potatoes, and other
vegetables for the family’s table.
9. My goal is to imitate their hard work and hopefulness.
10. I often pause to think about this brave and enterprising couple. 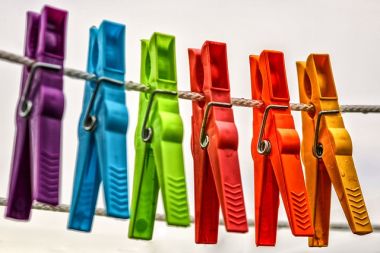 What is an appositive:  An appositive is a word or a phrase that will more clearly point out or explain a noun or a pronoun that comes right before it.

One worded appositives do not need to be separated from the rest of the sentence.  In other words, you do not have to use a comma or commas with one worded appostives.

My favorite book The Sins of a Family is a fun mystery to read.

An appositive is a noun or a pronoun placed beside another noun or pronoun to identify or
describe it.

EXAMPLE Haley, a math genius, helped me with my calculus.

1. The puppy, a Pomeranian, had long, wavy fur.
2. We gave the dry cleaner, Mr. Nowlin, our suits to press.
3. We especially wanted to hear the cellist Yo-Yo Ma.
4. The hottest months, June, July, and August, are my favorites.
5. The book details the activities of Timmy Roybal, a Pueblo.
6. Samuel Maverick, a cattle rancher, refused to brand his animals.
7. My mentor, Jane Galway, is helping me research colleges.
8. Terrill Park, my hometown, holds a parade each year for Independence Day.
9. My friend Anandi is learning to snowboard.
10. The last day of exams, Friday, is on our minds constantly.
11. The house, a turn-of-the-century mansion, is now a museum.
12. We’ve looked everywhere for our dog Jake.
13. Dr. Renwick, the violin teacher, also plays cello and viola.
14. Who wrote the poem “Ode on a Grecian Urn”?
15. The younger of the two boys in that family, Sam, looks like his grandfather.
16. The dessert, a magnificent chocolate cake, stood in the center of the table.
17. You should call your aunt Sarah this weekend.
18. He must take this medicine, an antibiotic, for ten days.
19. The addition to their house, an extra bedroom, took six months.
20. Mr. Galvan, the assistant principal, wants to see you in his office.