Dr. G.D. Baker on the left from Crandall came to Byrneville and delivered me into this world.  On the right is Mr. W. S. "Bill" Fellmy, who was my principal at New Salisbury grades 1-8.  Mrs. Fellmy was my 2nd grade teacher, Miss Georgia Clunie was 1st grade teacher.

My New Salisbury Class in the Elementary Years

I am in the very center on the 3rd row from the front.

This was back when I had hair and acne 😊

I am in the very center on the back row 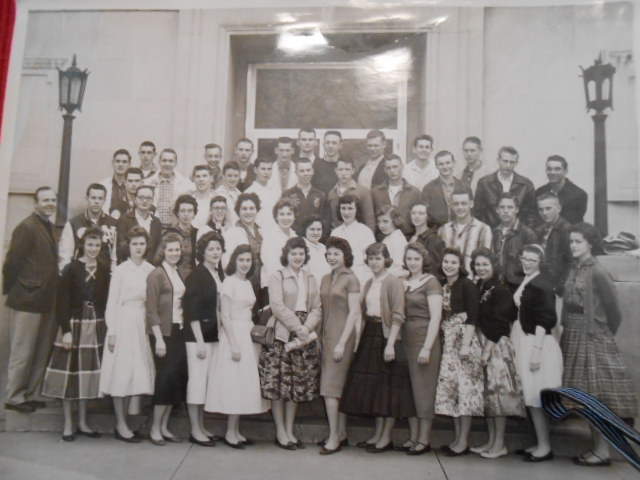 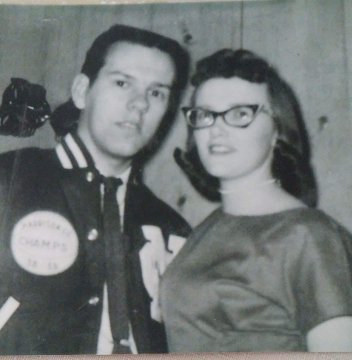 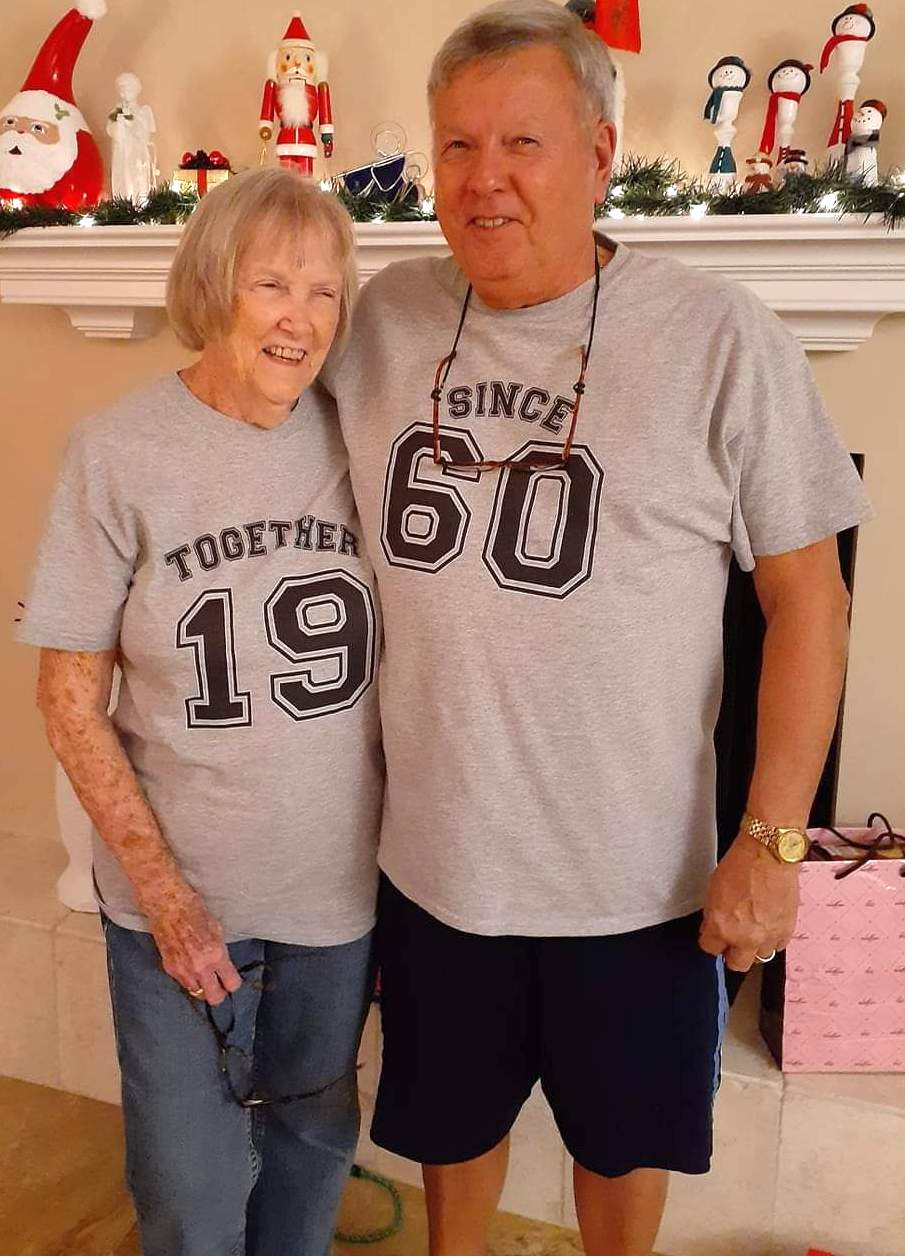 I also participated in Music Contests at Hanover College, Vocal and Instrumental

My Future Farmers of America Awards

My Vocational Agriculture Teacher, and FFA Sponsor, James Norman 1953 - 1959. He led the Ramsey Chapter FFA to win the Indiana State FFA Land Judging and also the Parliamentary Procedure Chapter Meeting Competitions.  Our Team also place 13th in the National Land Judging Competition which took place in Oklahoma. We would have done better, but we were not prepared to judge the light Oklahoma loam soil, it seemed to us that there was little or no top soil, which in fact was not the case. 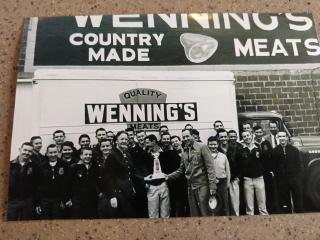 I also graduated as Valedictorian of my Class; My younger sisters Linda, Beverly and Judy were all Valedictorians of their classes following the example set by our Mother Alma Louise Byrn Utz. The Louisville Courier Journal wrote a nice article with picture of our accomplishments.

I played Basketball on the varsity, but sadly Coach Howard Key only played his top 6 players, even though I was 6'3", the tallest on the team. I had a total of 5 minutes playing time, scoring a total of 6 points in 4 years but I became a really good benchrider. It was a very hard way to earn my Letter Jacket!  I lettered in Baseball also playing 1st base and switch hitting over 400.  My teammates could never throw the ball right at me, without me having to jump for it or dig it out of the dirt

In 1959 with my favorite dog was Star, a pure bred Samoyed, that I had raised from a pup. 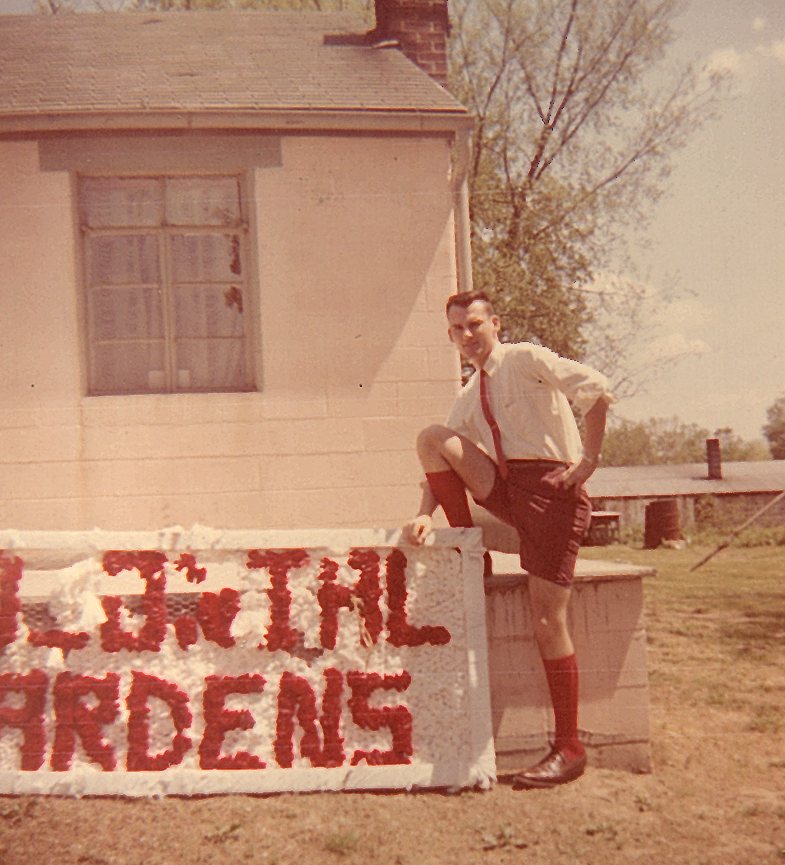 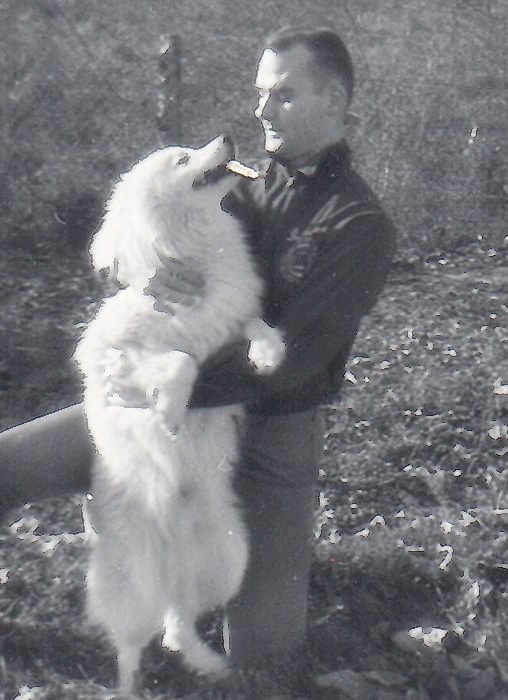 High School days were also a time for alot of church activies,

our youth group in Byrneville called Zion's League. We went to camps and Reunions.

At Rivervale Reunion Grounds there was a talent show and I participated with my friends Mike Weathers (trombone), Mickey Stetler (trumpet) I am playing my tenor saxophone, When the Saints Come Marching In, decked out in my music letter jacket, favorite red check bermuda shorts and white knee socks 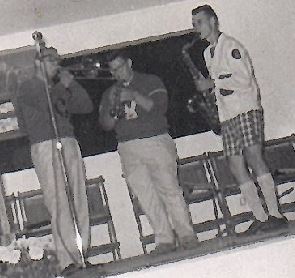 The TOWER on the Administration Building "This is my home, the hilltop where my heart is ..." 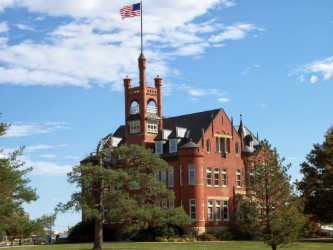 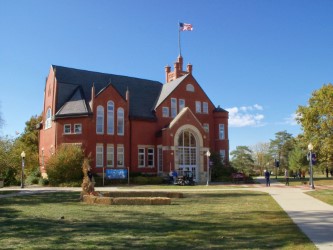 My Graceland Love Sheri Allen was my 1st Love, but she regarded me only as her best friend.  She even had a pet name for me which was "Bunky"!   In costume, we are portraying Joseph and Emma Smith at a campfire.  Sheri and I were swimming buddies for swimming in Lake Huron. She and I are forever friends.   I introduced her to my mother at the Amboy Centennial World Conference

My other Love at Graceland was service to God. One of the ways I served was by joining Zeta Zeta Chapter of Alpha Phi Omega, National Service Fraternity. I eventually became a Life Member and transferred my membership to Mu Chapter Indiana University and moved onward into my life of service. 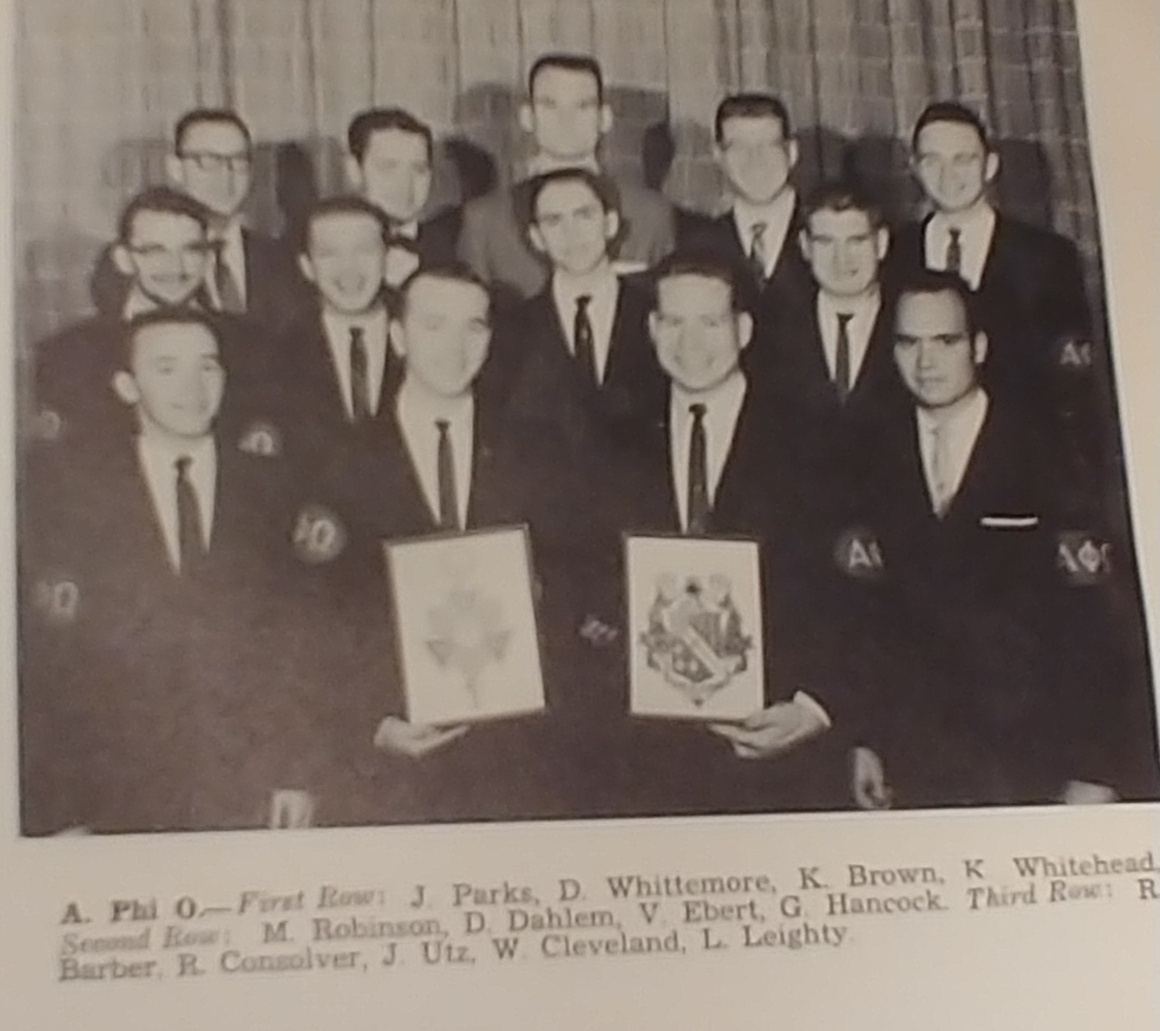 My service was expressed in often unusual ways, entertaining  my friends.  I played tenor sax in the Graceland Band and toured with the Orchestra, playing clarinet and bass clarinet. I am not pictured in this orchestra picture. I was also in the Graceland Players production of Finian's Rainbow as "The Sheriff". 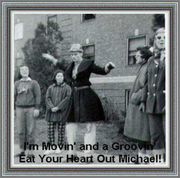 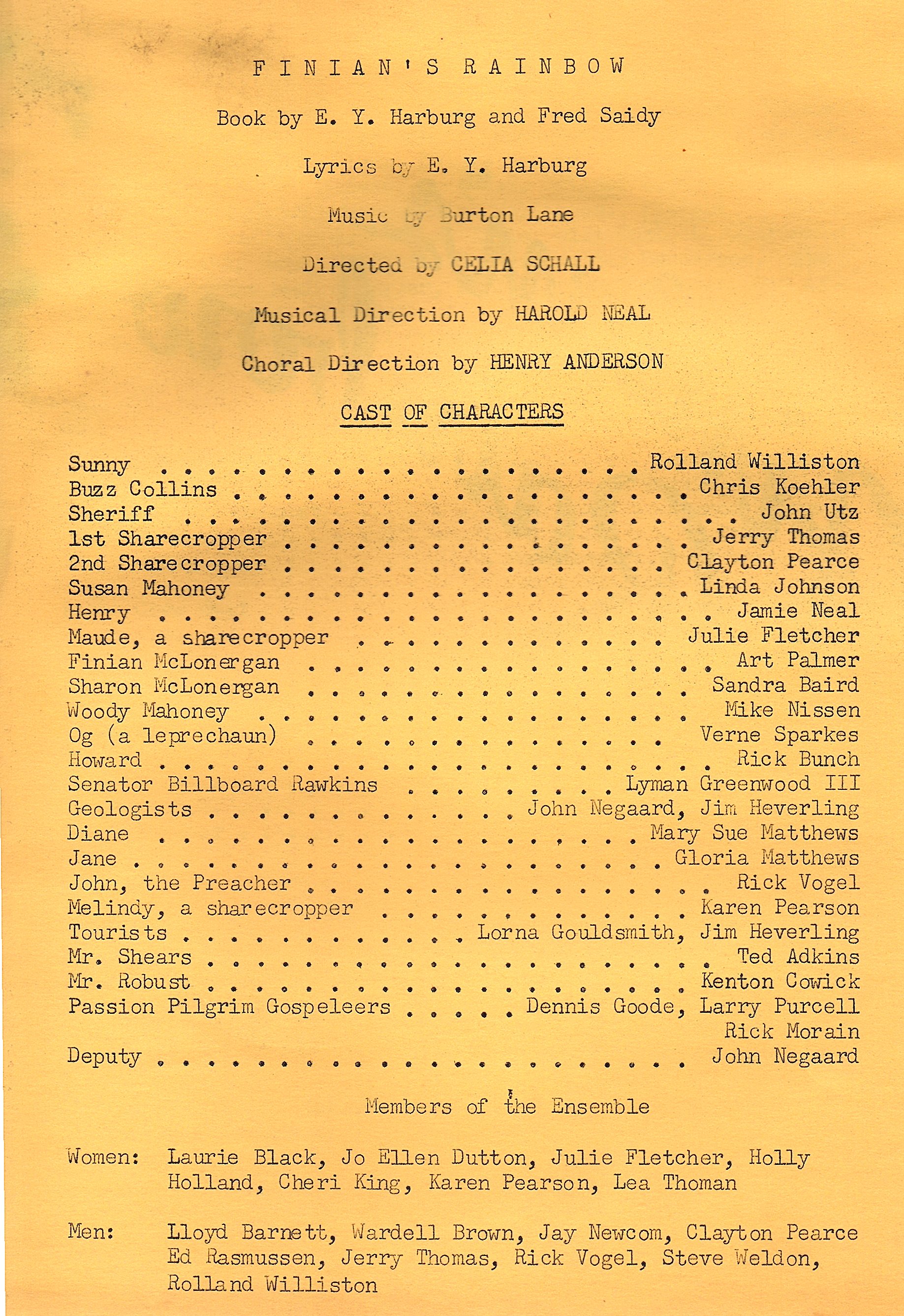 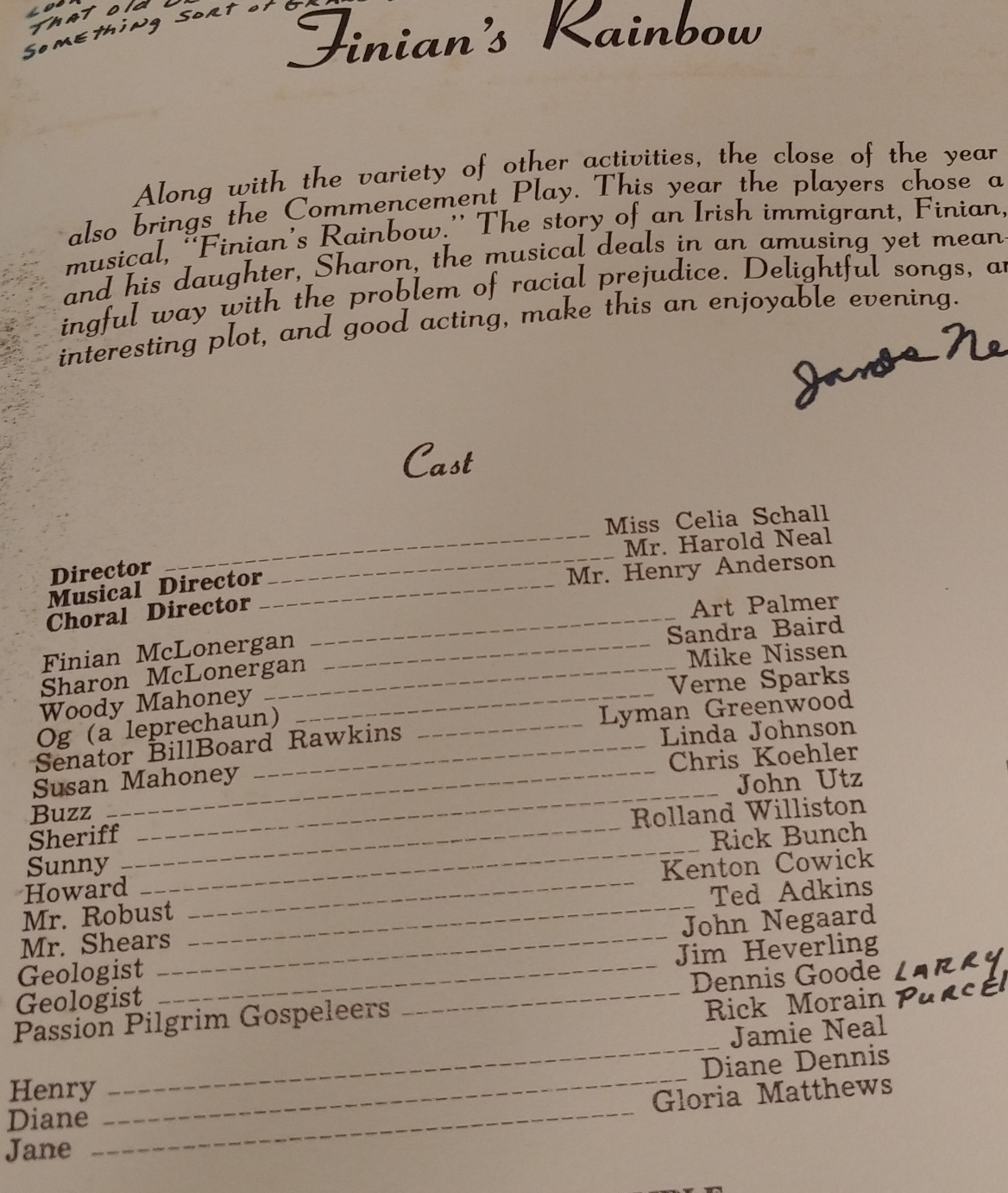 I was a member of the AUB Social Club and one semester served as its Chaplain. Back late 50's to pledge a social club like the AUB's you had to go through a weekend of Hazing. That included taking 3 swats from a leather paddle by an active brother. When an active brother would confront you, he would say "take the point" and you would have to bend down, grab your ankles and take the swats. My pledgemaster was Walt Gunderson who was captain of the football team and I was scared to death by his potential swats. Fortunately for me he never did. The hazing ended up on Sunday  afternoon, with the indignity of rolling a marshmellow across a cow lot with your nose and then eating it. They also covered you with dirt and debris and smashed eggs over your head. I wish I still had the picture of what I looked like when I came back to the dormitory.  I was a dreadful sight. This picture was typical: 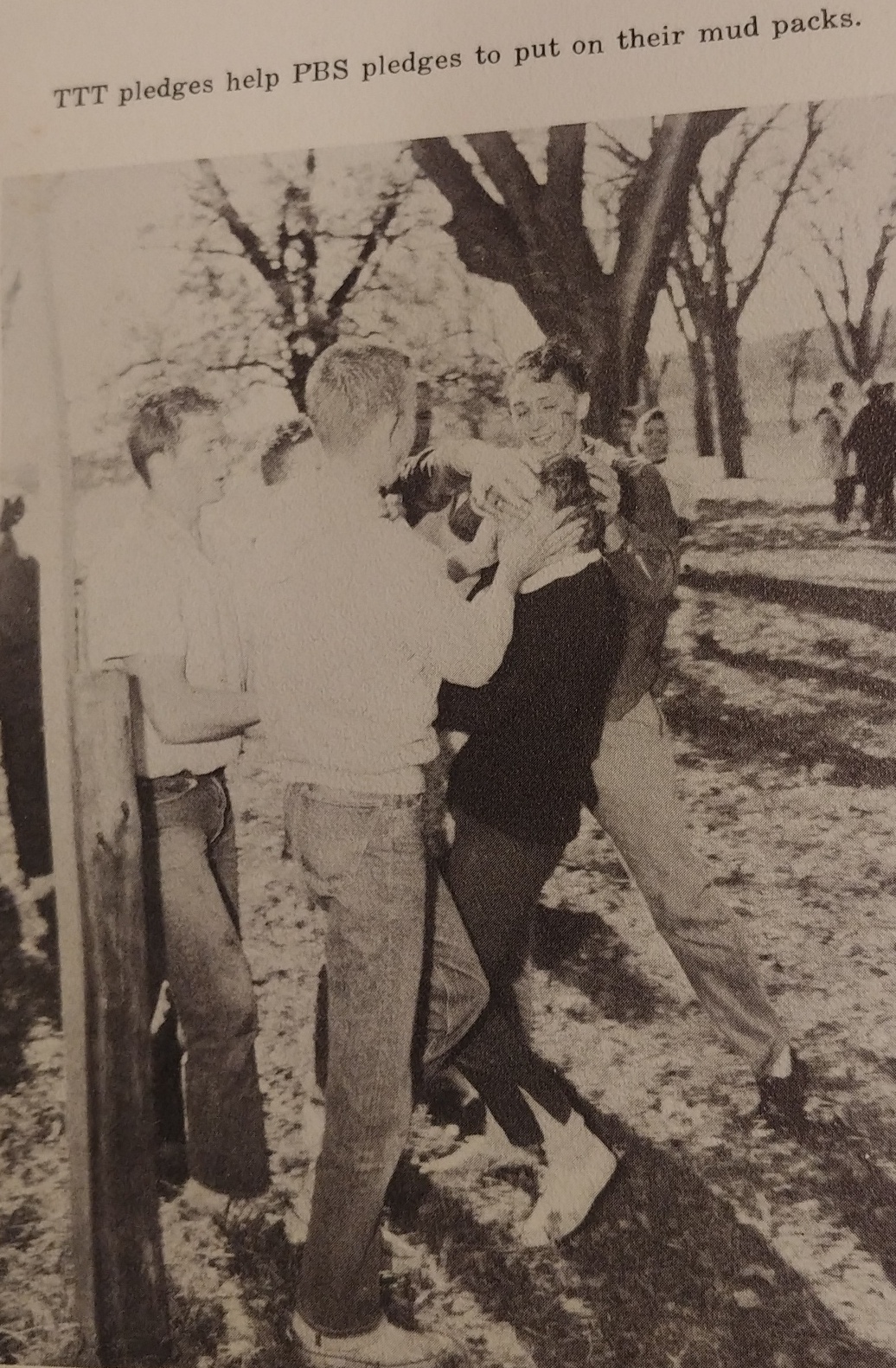 Major in Physics and Mathematics, Minor in General Science

(I was, at my best, an average student in college) 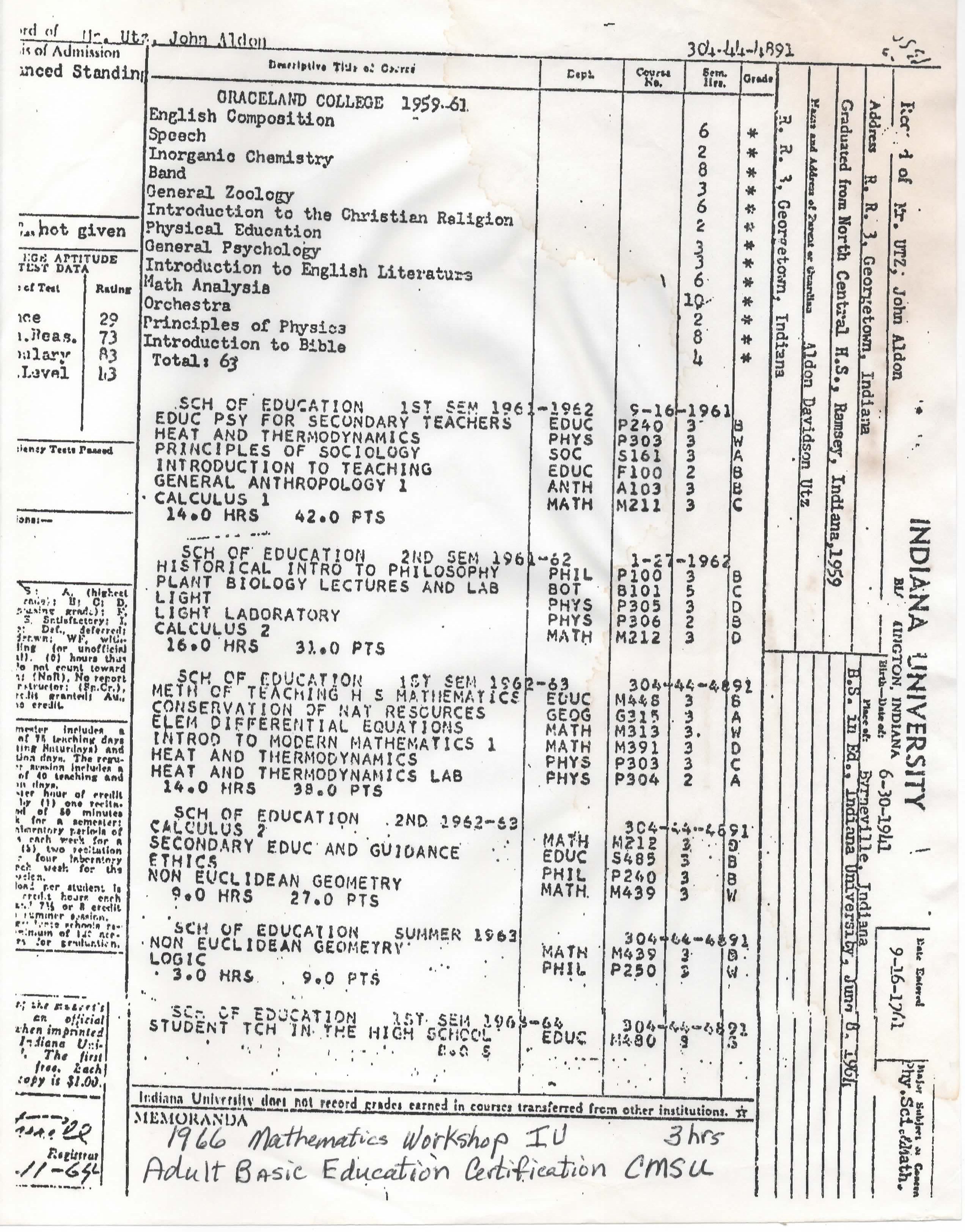 I have a Missouri Lifetime Teaching License in Science & Mathematics.

and preached my first Missionary Series there in 1964.

In my trigonometry classes, I taught elementary principles of topology.

As an experiment I took off my vest without taking off my coat, my Topological Twist! 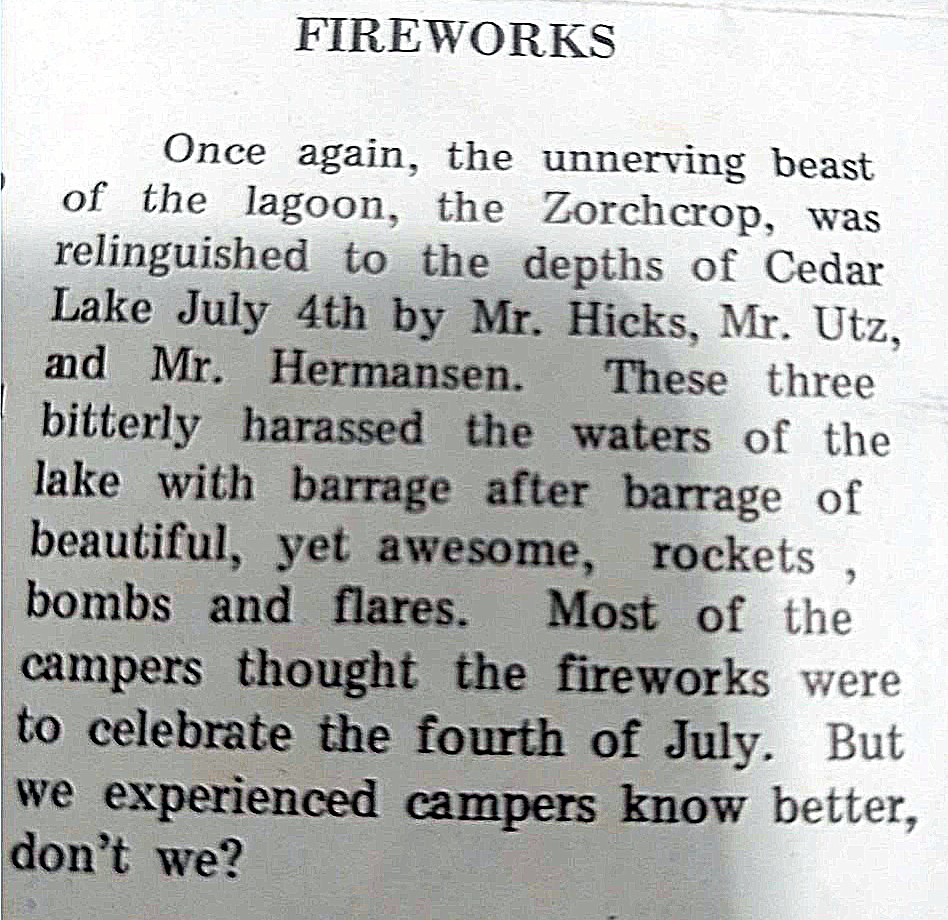 Published some of my poetry in the Howe Herald;

My friend Dick Wright and I coached basketball together and organized BSA Troop 113. I asked Dick to be my best man in my wedding in 1970.

Giving some pointers to my all star 7th grade center, Mike Lewis;

His skills were just awesome, he reminded me of a young Oscar Robertson.

Beginning in 1967 I met and became friends with Michael "Mike" Casey.

We continued best friends until his death. I visited Mike when He lived in Casper, Wyoming and went down-hilling and cross-country skiing on Casper Mountain. 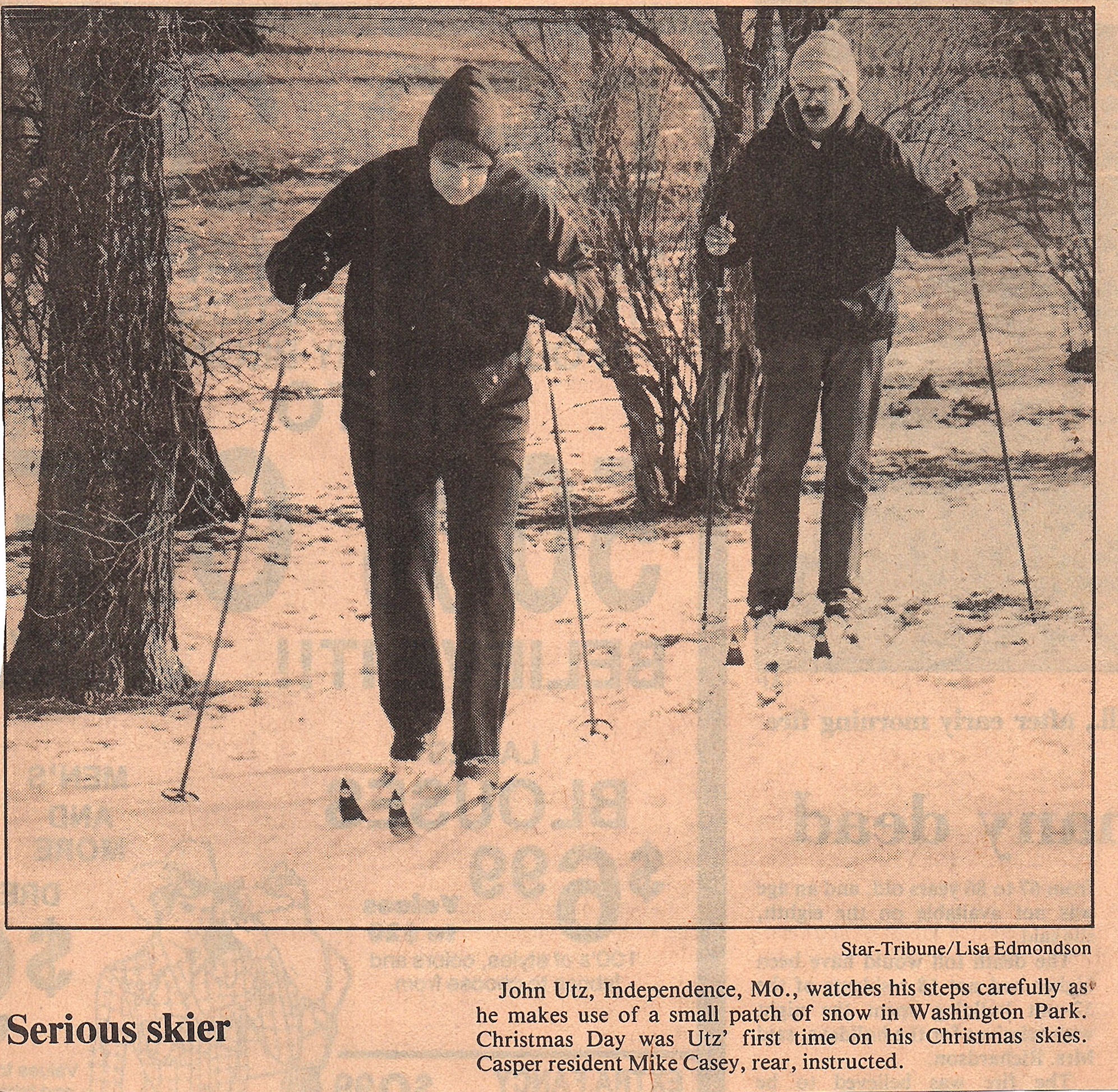 Serving as a Seafood Manager.

Taught a class in Basic Skilles Mathematics on Thursday nights.

Taught a Review of Trigonometry for MODOT workers on Saturdays for 3 months;

My class gave me this certificate and plaque for teaching them. 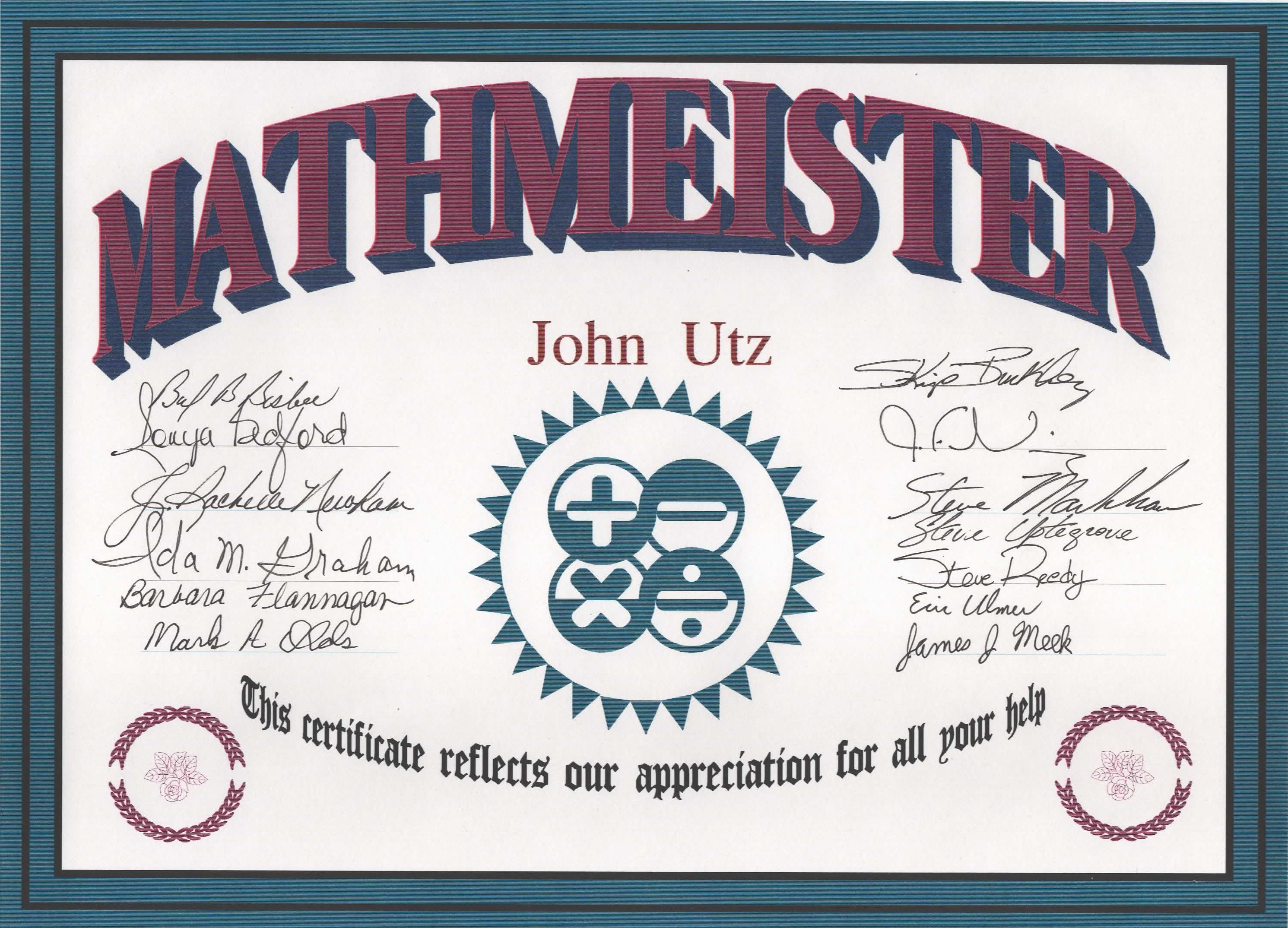 "The Declarations of Independence"

My wife Alyce was pianist for the Chorus

I once performed a pre-concert show as a female clown, Declara! 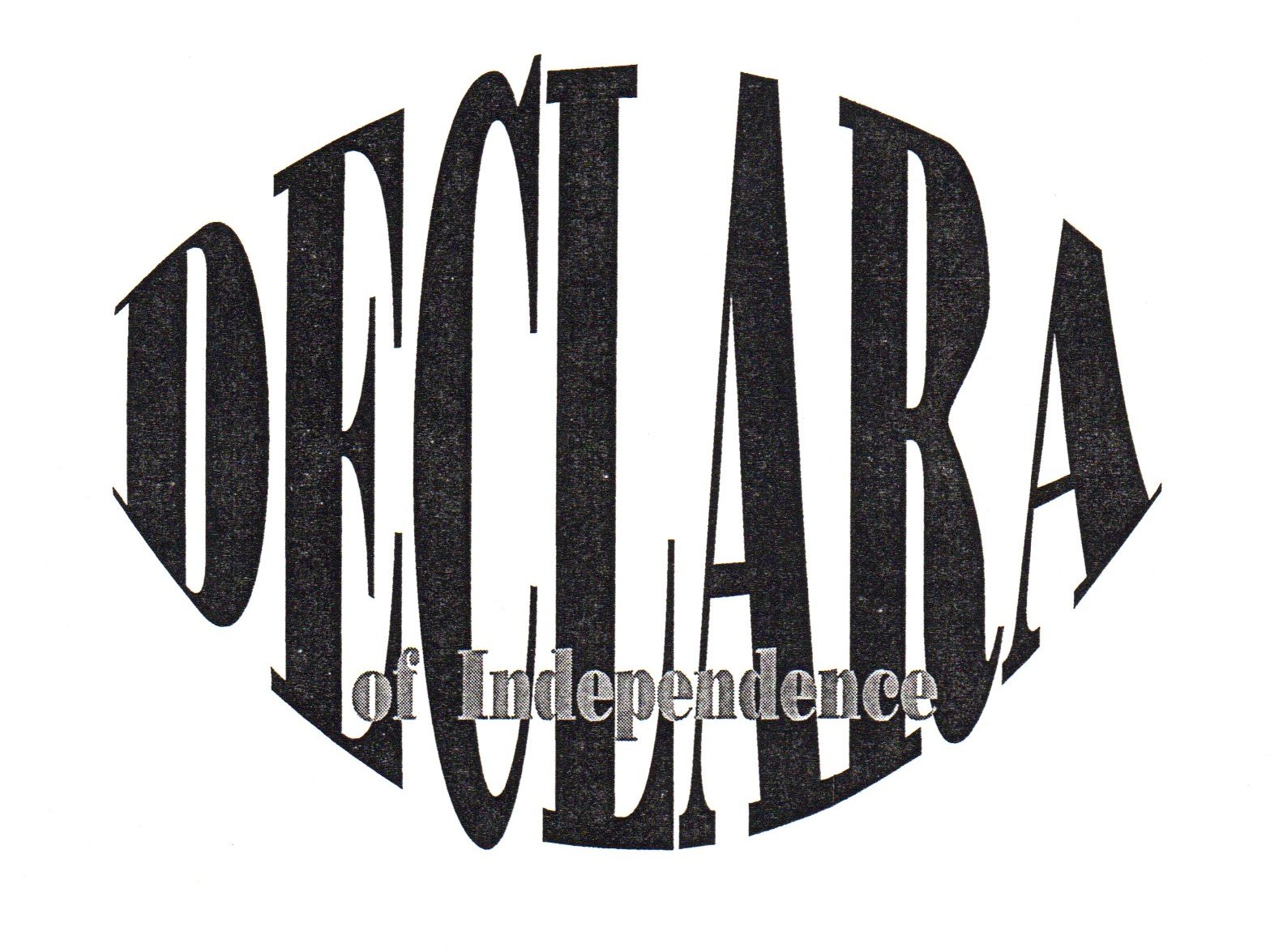 One the things that Declara did was look hard at the crowd and try to find a fella, which she dubbed Declara's "Hot Dog" and gave them one of these:

In 1995 Christmas time I slipped on black ice fell, knocking myself unconscious, rolling down a flight of concrete stairs, breaking my left arm in two places.  I delivered pizza with a full arm cast bent at a right angle at the elbow, balancing the pizza bags on my forearm.

Fibromyalgia and chronic depression forced my retirement after that in 1999.