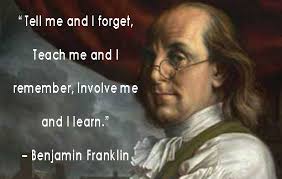 Benjamin Franklin was born in Boston on January 17, 1706. He was the 8th child to his parents and also had many half-siblings. He attended Boston Latin School but did not graduate; he continued his education through voracious reading and his schooling ended when he was ten.

At 12 he became an apprentice to his brother James, a printer, who taught Ben the printing trade. Because James wouldn’t allow Ben to write, he started writing secretly using the name Silence Dogood, and slipped his stories under the door of his brother's print shop. His brother published the stories in his newspaper and everyone loved to read them. James was unhappy with Ben when he discovered the popular correspondent was his younger brother.  At age 17, Franklin ran away to Philadelphia, seeking a new start. Franklin married Deborah Read on September 1, 1730. They raised Franklin's illegitimate son, William and they had two children: Francis Folger Franklin who died at the age of 4 and Sarah Franklin.

After the death of his wife Deborah, the elderly Ben lived with his daughter Sarah.. She nursed him as his health weakened until he died on April 17, 1790, at age 84. Approximately 20,000 people attended his funeral. He was interred in Philadelphia. Franklin's actual grave, as he specified in his final will, simply reads "Benjamin and Deborah Franklin.