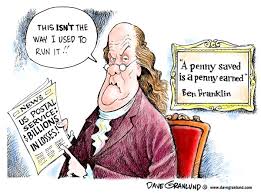 Benjamin Franklin was honored and noticed for many of his achievements over the years.  In 1736, he was the clerk of the Pennsylvania Assembly and the postmaster of Philadelphia from 1737 to 1753. In 1753, he became the postmaster general of the British colonies in America and the agent to Europe for Pennsylvania from 1757 to 1762. In 1776, he was the commissioner to the French Court and the minister plenipotentiary to the French Court in 1779. Ben stands alone as the only person to have signed all four of the documents which helped to create the United States: the Declaration of Independence (1776), the Treaty of Alliance, Amity, and Commerce with France (1778), the Treaty of Peace between England, France, and the United States (1782), and the Constitution (1787).  In 1785, he became the Supreme Executive Council of Pennsylvania, President of Pennsylvania Society for the Abolition of Slavery. Last but not least, he was the senior member of the Constitutional Convention in 1787.