George Nissen and the Kangaroo

George graduated in 1937 from business school. He wanted to travel as part of his job so he took his acrobat group, The Three Leonardos to fairs. They incorporated the trampoline in their act and generated plenty of interest. George patented his invention and started a company. The second world war dampened their business but George even managed to sell some trampolines to the military. He was not involved in war time anticommunist politics.  He preferred to stay clean politically.

After the war, George orchestrated an incredible publicity stunt in Central Park, New York. He and a kangaroo performed on the trampoline. He started bouncing on one end while the kangaroo on the other end had to bounce as the mat propelled him into the air. It was successful and the photos of the event went around the world.  Nissen began to sell his product in Europe, South Africa, South America and Japan. 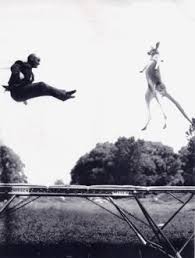