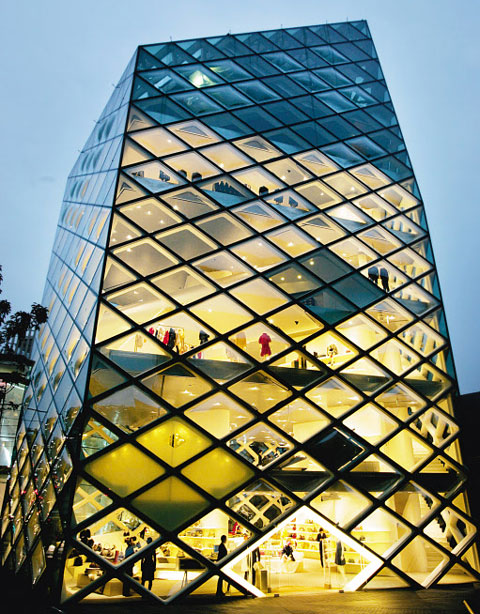 The Prada building in Tokyo,Japan is one of the famous buildings of tokyo,

the building is famous for making the best clothing in japan.

Lined with famous brand shops including Gucci, Dior and Louis Vuitton, a stretch of Tokyo from Aoyama to Omotesando has become must-see destination for visitors to Japan. Tokyo's Prada building, with its transparent exterior and bug-eyed window panels has emerged as one of the trend's leading examples. Now tech companies are getting into the game, too, with Sony and Apple contributing eye-catching buildings in Ginza.

Prada's Tokyo store, in the fashionable Aoyama district, a mixed-use neighborhood of low-rise buildings where not a square meter of land has been left unoccupied, is the company's second radical approach to fashion-store architecture, following Rem Koolhaas’ Prada Flagship Store New York. The store was built by the Swiss architecture team of Herzog & de Meuron. The intent is "to reshape both the concept and function of shopping, pleasure and communication, to encourage the meshing of consumption and culture." The Tokyo store is a strikingly unconventional 6-story glass crystal that is soft despite its sharp angles – as a result of its five-sided shape, the smooth curves throughout its interior, and its signature diamond-shaped glass panes, which vary between flat, concave and convex "bubbles".

Herzog & de Meuron realized "a house and a plaza," a tall and narrow kaleidoscope-like structure that houses two floors of retail space and multiple levels of offices, backed by an outdoor space for the public - a rarity in crowded Tokyo. The finished structure, encased in a visually porous shell or skin, is as decorative as it is architectural and is both metaphorically and literally linked to its surrounding environment, and to the idea of the garment.

Jacques Herzog describes the glass panes of the building's facade as "an interactive optical device. Because some of the glass is curved, it seems to move as you walk around it. That creates awareness of both the merchandise and the city—there's an intense dialogue between actors. Also, the grid brings a human scale to the architecture, like display windows. It's almost old-fashioned."

At Prada Aoyama the glass walls are not the usual transparent curtain-walling (as at Renzo Piano’s Maison Hermes, across town in the Ginza district), but a transparent, structural shell. Within, the structural cores and tubes morph seamlessly into elevators, stairs, fitting rooms and display shelves, giving a

sense of continuous shopping space, very much integrated into the architecture

The building consists of a complex of three structures each taking up a city block. The tallest and most prominent of the three is Tokyo Metropolitan Main building No.1, a tower 45 stories tall that splits into two sections at the 33rd floor. The building also has three levels below ground. The design of the building (which was supposed to looks like a computer chip), by architect Kenzo Tange (and associates), has many symbolic touches, most notably the aforementioned split which re-creates the look of a Gothic cathedral.

Finished in 1991 at the expense of 157 billion yen (about $US 1 billion) of public money, a popular nickname for Tocho is "Tax Tower."

JR Train Service: Hamamatsucho Station on the Yamanote line then a 15 minute walk.