A basic information about valves and its types

As we all know that pipelines helps to efficiently transport huge amounts of liquids and gases collectively known as fluids. But pipelinerequires a regulating body which can decide the amount of the flow and when to start and stop the flow for their efficient working. This is the time where, valves come into picture and are the regulating body whichhelps to control the flow rate and act as a switch which can start and stop the flow.Valves also playing an important role in the movement of fluids in many industries such as oil and petrochemicals, pharmaceutical industries and food and beverage industries and also become an important parts of many types of machinery too.

Industrial Valves are mechanical devices whichblock pipes or passages of gasses and liquids either wholly or in some measure to control the flow rate as needed. In our daily lives we come across many valves, but probably we never noticed them. The taps which we open and close to control the flow of water is also a valve eventhe regulators which we use to control the gas flow from our gas pipelines are also valves. Also it can be found in cookers as well.

All valves are generally quarter turn valves as we have to turn the lever by 90 degrees to start and stop the flow and use a hollow, pivoting and perforated ball which is also called as a floating ball valves. And from this valve the flow of fluids takes place. When the lever or handle is moved to 90 degrees, the hole of the ball gets line up with the pipe opening and help to start the flow. When the lever is turned by 90 degrees again, the hole turns around and the ball will block the opening of the pipe that helps to stop the flow. 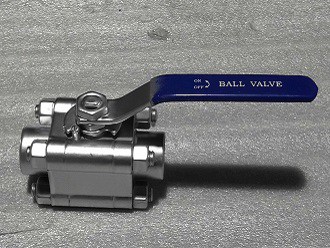 A double block and bleed valve is a single valve with two seating surfaces which are,the closed position, and that provides a seal against the pressure from both the ends of valve with a means of vending or bleeding the hole between the seating surfaces. They are mostly used in the oil and gas industries, but they can also be helpful in other industries as well.

There are different types of ball valves which are extensively used in numerous industries and all depending upon to their designs, sizes and the pressure handling capacities. Most of the common ones are reduced port, cavity filler,Full port, V port, trunnion ball valves (have an anchoring or disc above and below the valve which help in high pressure flow rate) and the multiport valves.

Gate Valves are made to serve as an isolation valves.  These kind of valves help to control the liquid flow through the pipes. These valves affixed to the pipelines to start and stop the water flow or any other kind of liquid. These are used for many purposes and they can be seen mostly in homes and commercial centres. Different materials such as cast iron,stainless steel, forged steel, alloy steel etc are used to manufacture these kind of valves.