Hello English 9 students! Welcome to your page. Over the next few days, I will upload and add things to this page for your final exam. This is just another source for you to study. Check back every day! There may be a BONUS point opportunity listed on this page!

Review Slide Notes
*Character
*Character – a person in a story, poem or play.
*Types of Characters:
*Round- fully developed, has many different character traits
*Flat- stereotyped, one-dimensional, few traits
*Static – Does not change
*Dynamic – Changes as a result of the story's events
*Characterization
*How the author develops the characters, especially the main character.
*This is done through:
*what the character does or says
*what others say of and to the character
*author’s word choice in descriptive passages
*Characterization
*Direct characterization
*The author directly states what the character’s personality is like.  Example: cruel, kind
*Indirect characterization
*Showing a character’s personality through his/her actions, thoughts, feelings, words, appearance or other character’s observations or reactions
*Protagonist
*Main character of the story that changes
*(death is not a change)
*the most important character
*changes and grows because of experiences in the story
*Antagonist
*A major character who opposes the protagonist
*the antagonist does not change
*Types of antagonists:
*people
*nature
*society
*Conflict
*A struggle between two opposing forces
*Types
*Internal – takes place in a character’s own mind
*Man vs. Him(Her)self
*External – a character struggles against an outside force
*Man vs. Man
*Man vs. Nature
*Man vs. technology, progress
*Man vs. Society
*Man vs. Supernatural
*What is the Plot?
*Plot:  Series of related events that make up a story.
*Exposition
*Section that introduces characters, the setting, and conflicts. 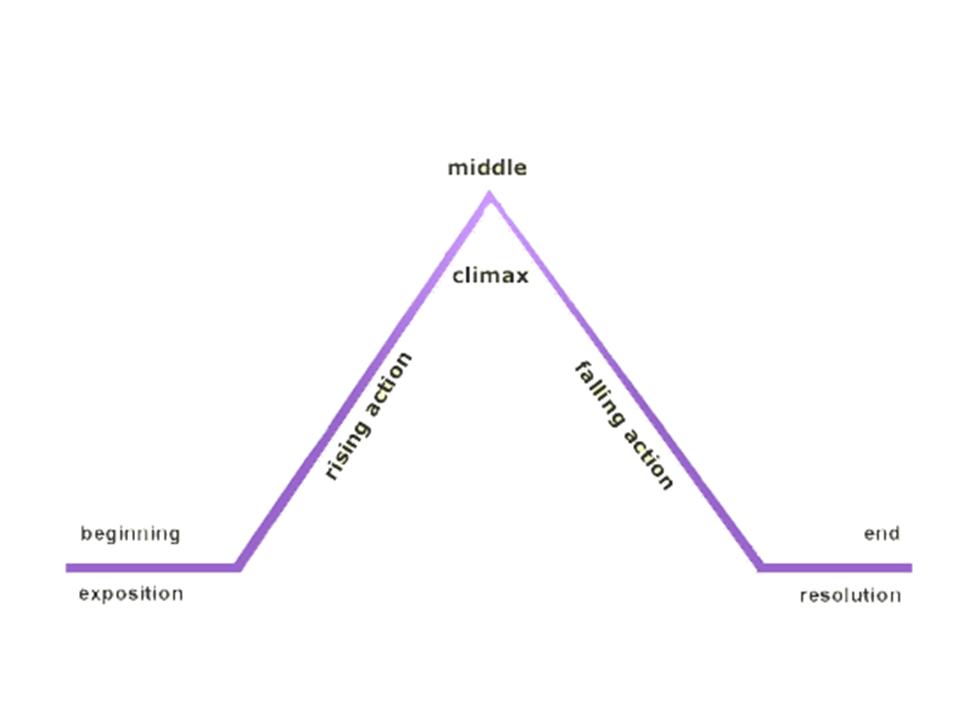 *Setting
*The time and place of the story’s action
*Rising Action
*Consists of a series of complications.
*These occur when the main characters take action to resolve their problems and are met with further problems:
*Fear
*Hostility
*Threatening situation
*Climax
*The turning point in the story: the high point of interest and suspense
*Falling Action
*All events following the climax or turning point in the story.  These events are a result of the action taken at the climax.
*Resolution
*(Denoument)
*The end of the central conflict: it shows how the situation turns out and ties up loose ends
*Point of View
*Vantage point from which the writer tells the story.
*First person- One of the characters is actually telling the story using the pronoun “I”
*Third person- Centers on one character’s    thoughts and actions.
*Omniscient- All knowing narrator.  Can center on the thoughts any actions of any and all characters.
*Theme
*The central message or insight into life revealed through a literary work.
*The “main idea” of the story
*Flashback
*The present scene in the story is interrupted to flash backward and tell what happened in an earlier time.
*Foreshadowing
*Clues the writer puts in the story to give the reader a hint of what is to come.
*Symbol
*An object, person, or event that functions as itself, but also stands for something more than itself.
*Example: Scales function is to weigh things,

but they are also a symbol

of our justice system.

*Figurative Language
*Involves some imaginative comparison between two unlike things.
*Simile – comparing two unlike things using like or as.
*“I wandered lonely as a cloud”
*Metaphor – comparing two unlike things (not using like or as)
*Life is a roller coaster, it has lots of ups and downs.
*Figurative Language
*Personification – Giving human qualities to non-human things.
*“The wind howled”
*Irony
*A  contrast between expectation and reality
*Irony
*Verbal Irony – saying one thing but meaning something completely different.
*Calling a clumsy basketball player “Michael Jordan”
*Situational Irony – A contradiction between what we expect to happen and what really does happen
*Dramatic Irony – occurs when the reader knows something important that the characters in the story do not know.

Persuasive Writing- A kind of writing intended to convince a reader to think or act in a certain way.

Expert Opinion- Writing that tries to convince a reader that something is good because an expert, like a scientist or doctor, says it is.

Emotional Appeal- Writing that appeals to a persons emotions rather than their brain.

Logical Appeal-Writing that asks the reader to "think" about an issue.

Repetition- Writing that tells you things over and over again.

Propaganda- The use of language, ideas, information and rumors to support one side of an argument over another.

Testimonial- A statement of support for a product or an idea made by a famous person.

Bandwagon- Writing that tells you that something is right because everyone is doing it.

Loaded Words- Words with lots of emotion associated with them.

Name Calling - Attacking the person, rather than their idea.

Bias: A preference for or against something that is formed without considering all of
the information.