The Unthanks    Here's the Tender Coming 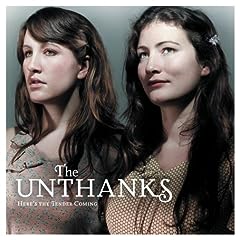 'Here's The Tender Coming' is the third album from sisters Rachel and Becky Unthank and sees them follow up their 2007 Mercury Music Prize nominated 'The Bairns'. Now recording asThe Unthanks, the album sees the band take on another collection of traditional folk songs and while the majority of the lyrical content still deals with the darker side of life the band have opted for a slightly warmer sound than that of 'The Bairns'.   Mr and Mrs Nunn recently took a rare break from their children and saw The Unthanks live at the West End Arts Centre in Aldershot!  "We thought they were absolutely brilliant!" Mr Nunn commented after the show!