102/100 BCE:  Gaius julius ceasar was born of Aurelia and Gaius Julius Ceasar a preator.His family had noble, patrician roots, although they were niether nor influential in this period.His aunt Julia was the wife of Gaius Marius, leader of the Popular faction.

c. 85 BCE: His father died, and a few years later he was betrothed and possibly married to a wealthy young woman, Cossutia. This betrothal/marriage was soon broken off, and at age 18 he married Cornelia, the daughter of a prominent member of the Popular faction; she later bore him his only legitimate child, a daughter, Julia. When the Optimate dictator, Sulla, was in power, he ordered Caesar to divorce her; when Caesar refused, Sulla proscribed him, and Caesar went into hiding. Caesar's influential friends and relatives eventually got him a pardon.

October 2, 48 BCE:Caesar, with no more than 4,000 legionaries, landed in Alexandria; he was presented, to his professed horror, with the head of Pompey, who had been betrayed by the Egyptians. Caesar demanded that the Egyptians pay him the 40 million sesterces he was owed because of his military support some years befor for the previous ruler, Ptolemy XIII(“The Flute Player”), who had put down a revolt against his rule with Caesar's help. After Ptolemy XII's death, the throne had passed to his oldest children, Cleopatra VII and Ptolemy XIII, as joint heirs. When Caesar landed, the eunuch Pothinus and the Egyptian general Achillas, acting on behalf of Ptolemy XIII (at this time about 12 years old), had recently driven Cleopatra (at this time about 20-21 years old) out of Alexandria. Cleopatra had herself smuggled into the palace in Alexandria wrapped in a rug (purportedly a gift for Caesar) and enlisted his help in her struggle to control the Egyptian throne. Like all the Ptolemies, Cleopatra was of Macedonian Greek descent; she was highly intelligent and well-educated. Caesar saw her as a useful ally as well as a captivating female, and he supported her right to the throne. Through the treachery of Pothinus and the hostility of the Egyptian people to the Romans, Achillas and an army of 20,000 besieged the palace. Caesar managed to hold the palace itself and the harbor; he had Pothinus executed as a traitor but allowed the young Ptolemy to join the army of Achillas. When he ordered the Egyptian fleet burnt, the great Library of Alexandria was accidently burried in the flames.

July 25, 46 BCE: The winning  and now unchallenged Caesar came back to Rome to celebrate four splendid  jubilation (over the Gauls, Egyptians, Pharnaces, and Juba); he requested Cleopatra and the year-old Caesarion and authorize them in a luxurious villa across the Tiber from Rome. In a letter at this time he listed his political aims as “tranquility for Italy, peace for the provinces, and security for the Empire.” His program for accomplishing these goals—both what he actually achieved and what he planned but did not have time to complete—was sound and farsighted (e.g., resolution of the worst of the debt crisis, resettlement of veterans abroad without dispossessing others, reform of the Roman calendar, regulation of the grain dole, strengthening of the middle class, enlargement of the Senate to 900), but his methods alienated many of the nobles. Holding the position of dictator, Caesar governed autocratically, more in the manner of a general than a politician. Although he nominally used the political structure, he often simply announced his decisions to the Senate and had them entered on the record as senatorial decrees without debate or vote. 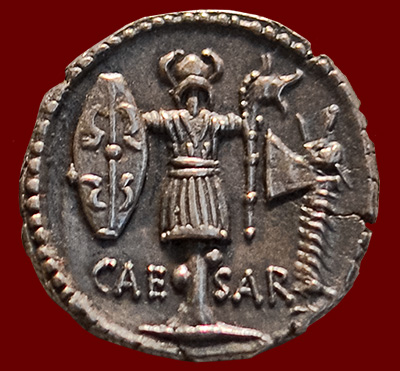 March 15 , 44 BCE: Caesar attended the last meeting of the Senate before his departure, held at its temporary quarters in the  portico of the theater built by Pompey the Great (the Curia, located in the Forum and the regular meeting house of the Senate, had been badly burned and was being rebuilt). The sixty conspirators, led by Marcus Junius Brutus, Gaius Cassius Longinus, Decimus Brutus Albinus, and Gaius Trebonius, came to the meeting with daggers concealed in their togas and struck Caesar at least 23 times as he stood at the base of Pompey's statue. Legend has it that Caesar said in Greek to Brutus, “You, too, my child?” After his death, all the senators fled, and three slaves carried his body home to Calpurnia several hours later. For several days there was a political vacuum, for the conspirators apparently had no long-range plan and, in a major blunder, did not immediately kill Mark Antony (apparently by the decision of Brutus). The conspirators had only a band of gladiators to back them up, while Antony had a whole legion, the keys to Caesar's money boxes, and Caesar's will. 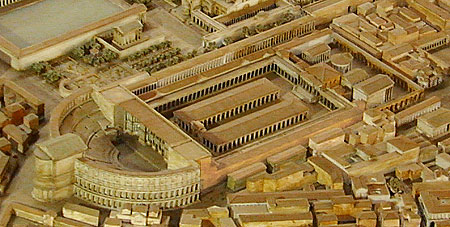