The Life of Benjamin Franklin

Benjamin Franklin was born on January 17, 1706, in Boston in what was then known as the Massachusetts Bay Colony. Benjamin was the 15th child and the last son of parent Josiah and Abiah Folger.

Benjamin Franklin was taken out of school at 10 to work with his father at candle making, apprenticed at 12, to his brother James' print shop.

Ben adopted the pseudonym Mrs. Silence Dogood and “her” 14 imaginative and witty letters were published in his brother’s newspaper, The New England Courant.

James was angry when it was discovered the letters were his brother’s, and Ben left his apprenticeship, moving to New York, then settling in Philadelphia, which was his home for the rest of his life.

Franklin furthered his education in the printing trade in Philadelphia, lodging at the home of John Read in 1723.

In 1724, Franklin left for London, where he worked in print shops there.

In London, he published his first pamphlet, after publishing another pamphlet, "The Nature and Necessity of a Paper Currency," Franklin was able to purchase The Pennsylvania Gazette newspaper from a former boss, and was elected the official printer of Pennsylvania.


Franklin’s success grew during the 1730s, with the publication of Poor Richard’s Almanack at the end of 1732. 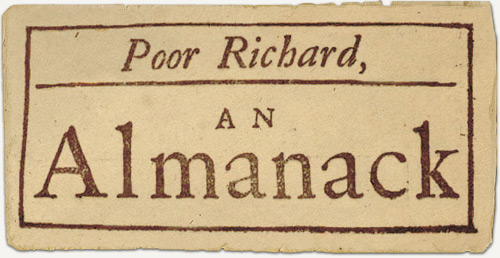 Franklin purchased real estate and businesses, organized the Union Fire Company, established a lending library, and was elected Grand Master of the Pennsylvania Masons, clerk of the state assembly and postmaster of Philadelphia.

An interesting fact about Ben Franklin's life is that he had many different jobs. Here are ten jobs that he had in his career.

•Ben Franklin was the first American to invent an instrument, the armonica.

•Ben Franklin was bad at math!

•Ben Franklin taught himself how to swim when he was eight, and often taught his friends how to swim. At one time he considered opening up a swim school.

•At the age of 16 Ben Franklin read a book about vegetable diets and decided to become a vegetarian.

•Ben Franklin convinced the Pennsylvania Assembly to switch from coins to paper currency because coins were hard to come by and cumbersome.

•Ben wrote a letter that convinced Congress to publicly debate slavery for the first time.

•After writing and publishing Poor Richard's Almanac and The Way to Wealth, Ben Franklin became so wealthy that he was able to retire from printing in his early forties.

•Ben nearly electrocuted himself to death while trying to cook a turkey with electricity! •Franklin crossed the Atlantic Ocean eight times and spent 27 years of his life living in other countries.

Benjamin Franklin died on April 17, 1790, in Philadelphia, Pennsylvania, at the home of his daughter, Sarah Bache. He was 84.