According to Christensson (2006), netiquette is defined as “etiquette on the Internet”.  Just as life has rules, so does asynchronous learning.

According to Adler, Rodman, and du Pre' (2012), many times, students have disinhibition when discussing topics in online classes. The rules of face to face classroom discussion are not always adhered to in the online learning environment. The lack of immediate consequences leads these students to say (type) things they normally wouldn’t in a classroom. Educators, researchers, and technological scholars have developed rules to abide by in online learning communities. These rules are usually called netiquette. 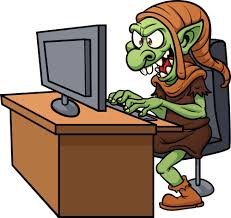 Below is a list of netiquette rules used in online classes at the University of South Alabama (2012).

1. Be sensitive to different cultural and linguistic backgrounds, as well as

2. Use good taste when composing your responses. Swearing and profanity should be avoided. Also consider that slang terms

can be misunderstood or misinterpreted.

3.  Don’t use all capital letters when composing your responses. This considered “shouting” on the Internet and is regarded as

impolite or aggressive. It can also be stressful on the eye when trying to read your message.

4.  Be respectful of others’ views and opinions. Avoid “flaming” (publicly attacking or insulting) others.

5.  Be careful when using acronyms. If you use an acronym it is best to spell out its meaning first, then put the acronym in

parentheses afterward, for example: Frequently Asked Questions (FAQs). After that you can use the acronym freely

7. In emails, always identify yourself and what class and section you are in. It is a good practice to put your course and section in

1. The Authenticity Rule – be real, and remember it’s not always about you.

2. The Google Rule – don’t let others know you have researched them online.

5. The Personalize it Rule – when friend requesting – personalize your messages.

6. The Off-Limits Rule – Opinions on controversial subjects should be left out.

7. The Tag – You’re It Rule – Don’t post unflattering pictures of friends online and then tag them

8. The When in Doubt, Don’t Rule – Don’t overpost or tweet

9. The Send Button Rule – Be sure to edit before pressing send.

According to an education website (2013),  cyberbullying is a serious offense and should be reported to authorities immediately. Parents should teach their children the following cyberbullying netiquette rules.

1. Don't bully or be mean to others online

4. Parents - don't let your children use webcams, Skype, or FaceTime without you there

5. Only add friends who you know

6. Never give out personal information

Spira, J. (2010). The Top 10 Rules of Netiquette for Social Media. Retrieved from http://socialmediamore.com/the-top

University of South Alabama (2012) Netiquette. Retrieved on August 24, from