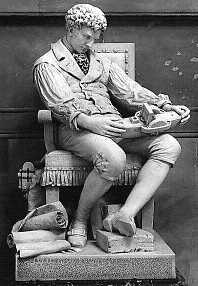 ROBERT FULTON, a celebrated American engineer and inventor, was born near Lancaster in Pennsylvania, in 1765. When a mere child, he manifested that taste for mechanics which he cultivated with so much success in after life. While other boys of his age were engaged in play, he found his amusement in visiting the workshops of Lancaster. When he was about seventeen years of age, he set up as a painter of portraits and landscapes in Philadelpia. In 1786, he visited London, where he pursued the study of his art under the tuition of his celebrated countryman, West. In 1793, he was associated in a project to improve inland navigation; he was already familiar with the idea of using steam as a propelling power for boats. From 1797 to 1804, he resided in Paris with Mr. Joel Barlow, the American repesentative at the French court. During this period, he invented a submarine or plunging boat, called a Torpedo, designed to be used in naval warfare. The French government declinedto patronize the project, and Fulton accepted an invitation from the English ministry, which also appointed a commission to test the merits of his torpedo. He appears, however, to have received but little encouragement, and in 1806 he returned to the United States. Having been supplied with the necessary funds by Robert Livingston, who had been American ambassador at Paris, Fulton had the satisfaction of proving, in 1807, that steam could be applied to the propulsion of vessels with entire success. His achievement excited universal admiration, and from that time steam-boats were rapidly multiplied on the waters of the United States. His first boat, the Clermont, made regular trips between New York and Albany, at the rate of five miles an hour, but this rate was soon increased by improved machinery. Fulton had married, in 1806, Harriet, the daughter of Walter Livingstone. In the midst of his triumphs, and in the height of his fame he died, on the 24th of February, 1815. He left four children