James Watt was a Scottish inventor and mechanical engineer, born in Greenock, who was renowned for his improvements of the steam engine. In 1765, James Watt while working for the University of Glasgow was assigned the task of repairing a Newcomen engine, which was deemed inefficient but the best steam engine of its time. That started the inventor to work on several improvements to Newcomen's design.

Most notable was Watt's 1769 patent for a separate condenser connected to a cylinder by a valve. Unlike Newcomen's engine, Watt's design had a condenser that could be cool while the cylinder was hot. Watt's engine soon became the primary design for all modern steam engines and helped bring about the Industrial Revolution.

A unit of power called the Watt was named after James Watt. the Watt symbol is W, and it is equal to 1/746 of a horsepower, or one Volt times one Amp. 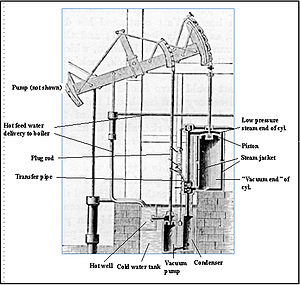