In addition to being a father of three, a successful printer and publisher, and a political activist, Benjamin

Franklin was also the father of several inventions, three of which are outlined here. 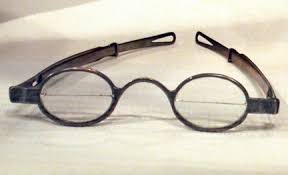 Franklin invented the bifocals in 1784 after suffering from presbyopia.  This is an eye condition many

people develop with age in which a person is no longer able to see things, such as print, up close.  Since

he was tired of switching back and forth between two pairs of glasses, he developed one pair which had

two half-lenses put together.  The top half was for distance viewing and the bottom was for viewing items up

The franklin stove saw its beginnings in 1742.  This was a cast iron stove which featured a hood enclosure in the front and an airbox in the back.  This design allowed for a more efficient fire which used less wood to produce more heat.